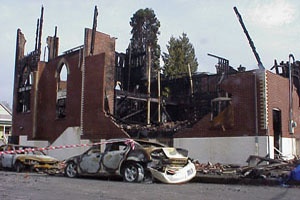 Colonel Grant is a man on a mission. A mission, he says, that takes a giant leap of faith.
"It won't be easy," Grant says. "But my heart is in this. This is a mission for God."
A Portland transplant by way of Memphis and Detroit, Grant has joined with on Oregon nonprofit, the Ghetto Risen Foundation, and a private promotions firm, Triple M Promotions, to help rebuild the Morning Star Missionary Baptist Church, which was decimated by fire in early February.
"Fire may have destroyed the church building, but Morning Star Baptist Church is alive and well," Grant says. "They're still holding services (at a space donated by Rose City Funeral Chapel) ... but they need help. They need the community's help to rebuild."
Morning Star Pastor Albert Wayne Johnson has told Grant that the church will need more than $2 million to rebuild at the original Northeast Ivy Street site.
"We're trying to get the word out, trying to get politicians and all the local ministers to help out with this," Grant says. "People paid attention after the fire, but nobody has really stepped up to help. Now it's time to get refocused and realize that we're serious about rebuilding."
In an effort to raise money for Morning Star, Grant has turned to the arts community.
Grant, along with the heads of Triple M Promotions – Marcus and Michael Kelly – are bringing the Broadway play "King Solomon Lives" to Portland this August.
"This is a Nubian love story about King Solomon," Grant explains. "It explores relationships and shows young people how to use their wisdom. It's an inspirational message."
"This is the perfect way to help raise money for the church – with a Biblical story," Grant says. "And it will take tenacity. It will take persistence. But we're positive because we're working on faith."
A deeply spiritual man who credits his hard-working, churchgoing father for the success he's had in life, Grant says he hopes Portland's church communities will set aside differences and come together for this cause.
"The community as a whole views this situation as a travesty that needs attention now," Grant says.
"Pastor Johnson says people ask him all the time whether the church will rebuild," Grant says. "He answers, 'If your house burns down, are you going to stop living?'"
The Ghetto Risen Foundation will bring King Solomon Lives to Portland for two shows, including a 3 p.m. matinee and an 8 p.m. performance, on Aug. 11.
The New Hope Community Church, which seats more than 2,000 people, has already offered space for the event.
General admission for the events cost $45 for the matinee and $65 for the 8 p.m. production. VIP seating in the balcony is also available for $20 more per seat.
For more information about King Solomon Lives, see www.kingsolomonlives.com. For more information on what Morning Star Missionary Baptist Church is doing in the wake of the February fire, see www.morningstarportland.org.
Grant hopes that, if the Portland show is a success, Ghetto Risen will be able to take the production on the road, on a 10-city tour, to raise even more money for Morning Star.
"This church was a staple in the community," Grant says. "And it needs to be reestablished."