Just Having a Ball 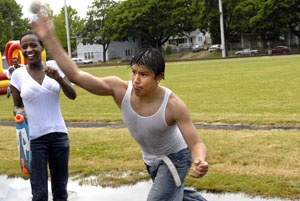 Jefferson student Loko Guyota, 15, left, cheers her friend, Alan Aguilera, 17, as he pitches a fastball successfully toward the dunk tank, knocking his friend off her perch during Jefferson's end-of-the-year field day on Friday, June 15.

It's hard for anyone to remember how long ago Jefferson High School held its last field day celebration.
In fact, amid all of Jefferson's recent changes, the annual field day almost faded away completely.
By Phoebe Tyesky's calculation, it was sometime in the late '90s when the entire school got together for an end of the year bash.
"It's something they really deserve," said Tyesky, Jefferson's activities director, in between orders to her colleagues on a walkie-talkie.
Tyesky looks over the growing crowd of students, who are gathering in front of Jefferson High on the last day of school, to figure out what activity station might need her help next.
On this particular Friday, Tyesky is noticeably stressed. The inflatable bouncing castle keeps losing air and she's making sure other activities go smoothly – the water gun maze, the dunk tanks, the barbecue for lunch, the airbrush tattoo station. And just when everything else seems to working itself out …
"Oh great, my phone died," she says. But the stress is soon lost in a stream of water. Tyesky is soon enveloped in an on-again off-again guerrilla warfare water gun fight involving combatants and non-combatants. But it's all in good fun. Even students who can't fight back are smiling, screaming and running. If the sun were shining, it might show a great deal of steam being released from students and faculty alike.
The field day is all about fun and games, but it's also a way for incoming freshman to meet faculty and upper classmen. It helps them get acquainted with high school and also lets them know Jefferson students can let loose and have fun, Tyesky says.
Standing over six feet tall, Tyrone White, Jefferson's student body president looks pleased by all the interaction on the field.
"It's the students who make Jefferson great," said White, who will enter his senior year in the fall. "It's a very diverse campus."
Calling Jefferson "home," many of White's family, including his dad, attended the school. White is attending class in both the arts and sciences academy.
Despite a year filled with its fair share of controversy – yet another resigning principal, a new academy system in place, a fight featured on YouTube.com and the evening news – White says students are feeling positive about their school. He even has good things to say about Jefferson's outgoing principal, Leon Dudley, who submitted his letter of resignation on the last day of school without notifying students.
"This field day lets people know we're not depressed about things," he said. "It wasn't that difficult. It worked out for many students. We like Cynthia Harris … we liked Leon Dudley too, he did good things for Jefferson."
And the students appear happy on this last day of school. There are no fights, participation is near 90 percent and students – one by one – are taking their turns sitting on the dunk tank trap door.
"You can do better than that," yells one student who soon finds himself in a vat of cold water. Even the clouds and fleeting sunshine can't suppress thoughts of summer days.
Acting a little shy at first, incoming freshman Kwasi Spears says he really wants to go to Jefferson – if only his mom will let him.
"My mom doesn't want me to go here because of all she's heard in the media," said Spears, who likes public speaking and writes socially conscious rap. "If I start going to Jeff, I have to get A's."
The soon-to-be freshman attended Self Enhancement Inc. this year, where he excelled, despite "people in the newspaper who say these kids can't learn anything." Spears says he's good at mathematics and hopes to enroll in the science and technology academy.
"I like to learn, I just don't like doing my homework," he said. "But when it comes down to it – yeah, I'll show you what I can do."
Down by the dance floor near the grandstands, where students are "walking it out" to the tunes of DJ Unk, Asterid Stark, a junior, says Jefferson students show plenty of Demo pride.
"It's all about the Demos," she said. "This is a school where all the teachers care about you."
Looking at the hundreds of students who showed up to school on the last day instead of skipping out, Stark said it proves that Jefferson students can overcome the difficulties of the last year.
Soaked to the bone after being sprayed by multiple water guns, Andreya Hudson said she's tired of Jefferson's illicit reputation. If only reporters asked the good students the questions when fights broke out or when principals resigned, Hudson said, things might be better.
"Reporters ask the stupidest people the stupidest questions," she said, referring to other news organizations. "It pulls us down a lot."
But next year, she says, will look a lot like last year. It'll be hectic, controversies will arrive, but she hopes Jefferson's reputation can change.
"Does this look like a bad school to you," she says, gesturing out into the crowd of teenagers.
As the clock neared mid-afternoon, Tyesky was still moving from station to station. The bouncing castle was fixed, students were largely finished with the dunking stations and the barbecue ribs and chicken were nearly gone.
"Successful? Yeah … I just won't get the big maze next year," she says, looking at the largely vacant inflatable structure meant for water gun wars. "I'll just get a bunch of water guns; it's a lot cheaper." 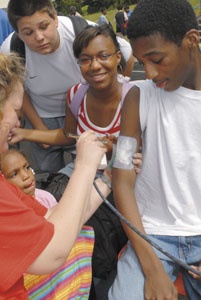