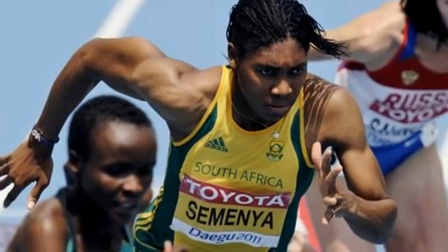 She faces nemesis Pamela Jelimo, 22, who at the 2008 Games in Beijing became the first Kenyan female runner to win an Olympic gold. The two duel in the 800-meter qualifying heats.

Semenya, 21, was the subject of a gender test by the International Association of Athletics Federations following her 2009 victory in Berlin at the world championships. She has since been cleared to compete.

The controversial tests followed her explosion into the international scene when she won the world title at age 18.

She crushed her rivals by streaking away to secure victory in a record 1:55.45 -- a time especially highlighted by her sudden rise from obscurity.

Her masculine build, chiseled abs and deep voice fueled rumors about her gender, sparking an international outcry. Outraged South Africans rushed to her defense and accused the world of invading her privacy.

The organization's handling of her case also sparked widespread criticism over accusations that it was unclear what standards the world body was using to determine her gender.

"The questioning of her gender is based on stereotypical view of the physical features and abilities attributable to women. Such stereotypes demonstrate the extent of patriarchy within the world's sporting community," South Africa's minister of women, Noluthando Sibiya, said at the time.

Officials for track and field's world governing body sidelined her for nearly a year before she was cleared to run against women in 2010 after undergoing gender and drug tests.

While the governing body said it had cleared her to run as a woman, it declined to provide medical details on the case, citing confidentiality.

"I am thrilled to enter the global athletics arena once again and look forward to competing with all the disputes behind me," Semenya said after her clearance. "Running is everything to me. When I am running, I am happy."

In addition to the gender scandal, she has suffered a series of setbacks, including withdrawing from the 2010 Commonwealth Games because of a back injury. She finished second in the 800 meters at the worlds in South Korea last year.

But all the firestorm was in the past as Semenya -- who is coached by 2000 Sydney Olympics 800m champion Maria Mutola --carried the South African flag in the opening ceremony in London.

The powerhouse runner flashed a bright smile as she entered the grandest athletic stage of all.