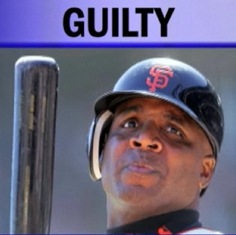 Barry Bonds was convicted of obstruction of justice today, but a jury failed to reach a verdict on three other counts of perjury. Prosecutors had alleged that the home run king lied to a grand jury when he denied knowingly using steroids and human growth hormone. Following a 12-day trial and almost four full days of deliberation, the jury of eight women and four men could reach a unanimous verdict only on one of the four counts against Bonds.
The Skanner News Video: Barry Bonds
US District Judge Susan Illston declared a mistrial on the others, a messy end to a case that put the slugger under a cloud of suspicion for more than three years.

Bonds, 46, sat stone-faced through the verdict, displaying no emotion. His legal team immediately asked that the guilty verdict be thrown out and Illston did not rule on the request. She set May 20 for a hearing in the case. Federal prosecutors and the Justice Department will have to decide whether to retry Bonds on the unresolved counts.

If the verdict stands, Bonds could be sentenced to up to 21 months in prison.

Bonds has acknowledged that he did take steroids but said his trainer misled him into believing they were flaxseed oil and arthritis cream.

Bond holds seven MVP awards, the career home run record of 762 and the record for most runs in a season – 73 in 2001. He ended his career at the San Francisco Giants in 2007.