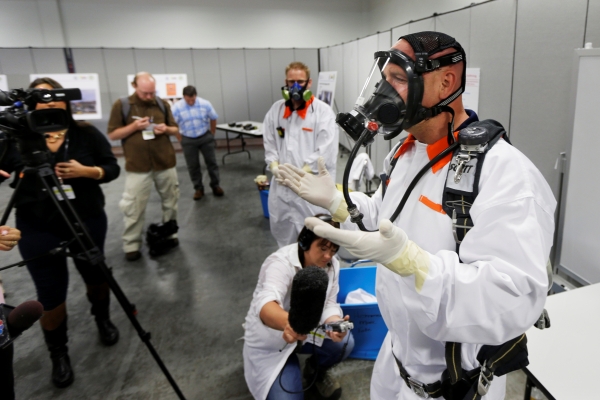 PHOTO: This July 9, 2014, file photo shows Bob Wilkinson, right, an environmental safety manager for the contractor Washington River Protection Solutions, demonstrating protective and clothing and a scuba-type tank-and-mask breathing apparatus used by workers in areas with potential exposure to possibly harmful vapors during a media tour of the Hanford Nuclear Reservation near Richland, Wash. The U.S. Environmental Protection Agency is fining another federal agency up to $10,000 for each week it fails to start moving radioactive sludge away from the Columbia River at the most contaminated nuclear site in the U.S. The Tri-Party Agreement required the U.S. Department of Energy to begin removing sludge from a storage basin at the Hanford Nuclear Reservation. (AP Photo/Ted S. Warren, File)

RICHLAND, Wash. (AP) — The U.S. Environmental Protection Agency is fining another federal agency up to $10,000 for each week it fails to start moving radioactive sludge away from the Columbia River at the most contaminated nuclear site in the U.S.

The Tri-Party Agreement required the U.S. Department of Energy to begin removing sludge from a storage basin at the Hanford Nuclear Reservation by Sept. 30. The Tri-City Herald reported that the Energy Department has missed that deadline, and it is proposing an extension to an undetermined date.

The EPA on Tuesday denied the extension and began assessing fines. The fine for the first week is $5,000, increasing to $10,000 for each additional week that the Energy Department fails to start removing sludge.

Hanford for decades made plutonium for nuclear weapons, and it is now engaged in cleaning up the nation's largest collection of radioactive wastes.

The Energy Department has 15 days to start efforts to resolve the dispute, and 30 days to submit a written statement if it disputes the EPA's denial of its proposal to set new deadlines.

The Energy Department said insufficient federal funding in fiscal 2013 and 2014 is to blame for the missed deadline. But the EPA questioned why the Energy Department had not proposed an extension until the deadline date, rather than when budgets were set in previous years.

The EPA already has extended deadlines for sludge removal numerous times, said the letter signed by Dennis Faulk, the EPA's Hanford program manager. The deadline for having all the sludge out of the K West Basin originally was 2002, and that has been extended 13 years, the letter said.

EPA denied the extension request because the Energy Department failed to say how long the extension would be, failed to identify related timetables or schedules that would be affected, and did not show good cause for the extension, the letter said.

"EPA has consistently made clear to DOE EPA's expectation that sludge removal work be funded and proceed," the letter said. "EPA has identified sludge removal as one of the highest Hanford cleanup priorities."

The basins attached to Hanford's K East and K West reactors were used to store irradiated nuclear fuel left over when much of the effort to remove weapons-grade plutonium stopped near the end of the Cold War.

As the fuel corroded underwater, it combined with dirt and bits of concrete from the pools to form a highly radioactive sludge.

The last of the 2,300 tons of fuel was removed from the basins in 2004. Since then workers have been dealing with the radioactive sludge that remains.

The next step is to get it out of the K West Basin and moved away from the river until it can be treated for disposal.

The Energy Department has spent $139 million to date on the sludge, with about $308 million total estimated to be required to get the sludge retrieved and treated for disposal.