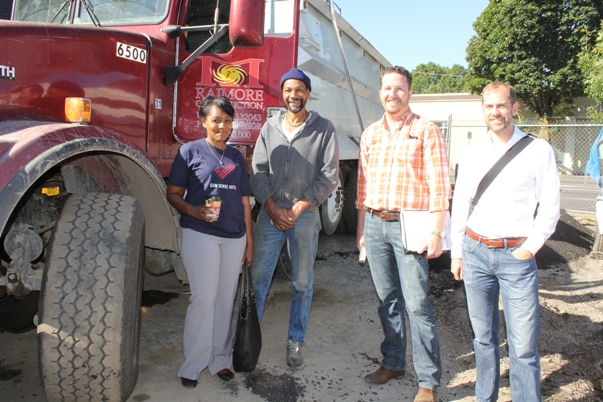 Teressa Raiford and her uncle Andre Raiford are pictured here with Josh Cabot, project manager and Geoff Grummon, architect, from Livermore Architecture and Engineering Inc.  Andre Raiford owns the site of the former Burger Barn at 3962 NE Martin Luther King, Jr. Blvd, which is now slated to be preserved as a community resource center and soul food court. African Americans have lived and worked at this address since at least 1906.

A corner lot on Northeast Martin Luther King Boulevard at Shaver St. is on track to become a soul food cart court and an education center where youth can learn about Black History.

The site is the former home of The Burger Barn, which hit the headlines in 1981 when two Portland police officers tossed four dead possums into its doorway, sparking outrage and protests in the Black community. The officers' firing led to protests from police who characterized the incident as a prank. Later the restaurant became Christopher’s Bar and Grill.

Andre Raiford, the site’s owner since 1969, said he considered tearing down the building and selling the lot. But he changed his mind after his niece Teressa Raiford showed him photos and other evidence of the site’s historic importance to Portland’s African American community.

“When she talked about the community and showed me the pictures from the past it moved my spirit,” Raiford said. “I could sell out, live large and go to Hawaii for a few years, but I’m ready to retire. I’m done. So if the youth want to come up and do something for the community I am all for that. I’m just moving aside and letting the youngsters take over.”

Teressa Raiford says the building is set to be renovated and renamed the Common Unity Resource Building. Under the guidance of Maija Anderson, head of historic collections and archives at OHSU, the building will house an archive of the site project as an example of historic preservation. 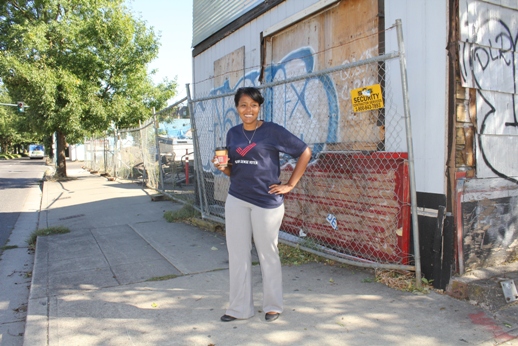 Teressa Raiford says students will be invited to explore documents and photos that show how historic preservation helps tell the story of Portland’s African American community. The site will showcase the wide variety of careers involved in a single project.

“We’d like to bring in experts to talk to students about careers they may never have been exposed to before,” Teressa Raiford said. “Youth need to know they can build good careers in all kinds of fields, including historic preservation, architecture, construction, design, archiving, science and engineering.”

Along with Cathy Galbraith, executive director of the Bosco-Milligan Foundation, she has been working to find grants and other funding for the project. She says she hopes to crowdfund some of the money needed through a GoFundMe page. The Bosco Milligan Foundation already has applied for a Sustainability and Community Livability grant from the Portland Development Commission to get the work underway.

The vision is to install a green, sustainable soul food cart court next to the Common Unity Resource Building. Livermore architects have volunteered to work on the design, which will include shrubs and greenery to shield the eating and meeting area from busy Martin Luther King Jr. Boulevard.

The possum incident is not the site’s only claim to historical importance. 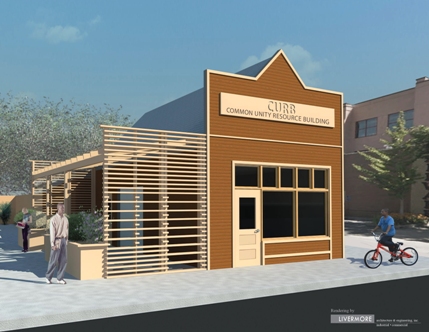 PHOTO:Livermore Architecture and Engineering say this is what the Common Unity Resource Center could look like. Project Manager Josh Cabot says, "The Common Unity Resource Building will be rehabilitated to reflect its early 20th Century appearance, by restoring its existing tongue and groove Douglas Fir siding and rebuilding its glass storefront.  A new covered patio will be added adjacent to the building which will allow for outdoor gathering and educational space.  A screen wall will be built along the front side of this covered patio space that will evoke the presence of a former building which previously sat adjacent to the building back in the early 1920’s."

Historian Tanya March, PhD, says Polk Directories show African Americans have been living and running a business at the site since at least 1906. Katherine Gray, founder of one of Portland’s Black women’s clubs, the Harriet Tubman club, lived at what was then 640 Union Ave. Her husband Harry Gray is listed as a gold miner. The couple had five children.

“She was a very important figure in the Portland Community,” March said. “The women’s clubs were at the center of community activity for decades.”

Katherine Gray, in particular, made a big contribution to Portland. She was vice-president of the Portland’s Colored Women’s Council in 1914, while daughter Edith, a hairdresser, was the secretary. Gray also worked with Hattie Redmond to co-found the Colored Women’s Equal Suffrage League to campaign for the vote.

Oregon Black Pioneers is working to identify historic sites in Oregon of importance to African Americans.  So far, the project, Preserving Oregon's African American Historic Places has discovered homes where Buffalo soldiers lived, churches where Black Oregonians worshipped and much more, including the site on Martin Luther King Jr. Boulevard at Shaver Street. Anyone who knows of a site that has not been recognized should contact Oregon Black Pioneers at makeoregonhistory.org or call the pioneers at 503-540-4063.