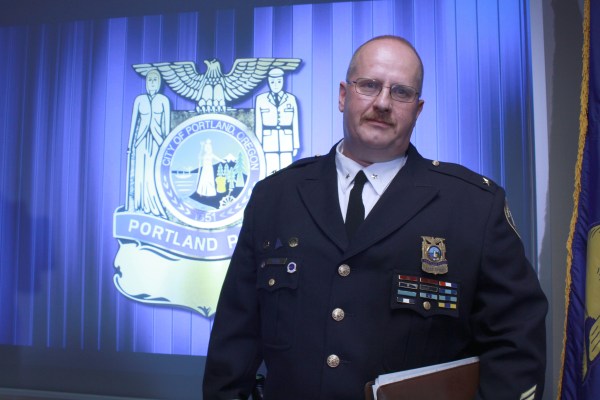 Assistant Police Chief Larry O'Dea at Tuesday's press conference announcing the handover. Chief Mike Reese will be one of the few Portland police chiefs in recent years to leave in a scheduled transition. Most have been fired. Photo by Helen Silvis

Portland Chief Mike Reese has announced he will retire in January 2015. His replacement will be Assistant Chief Larry O’Dea, a 28-year veteran officer.

“Larry O’Dea is one of the most decorated officers in the bureau — 11 medals and 75 letters of commendation,” Mayor Charlie Hales said at a press conference in the Justice Center, Tuesday.

“He shares my goals and aspirations. He has been living the idea of community engagement. He has led the bureau’s equity work. He has the respect of the command staff, the rank-and-file, and the community. He is the right leader at the right time.”

As assistant chief, O’Dea has been responsible for operations management across all three precincts, youth services, and the traffic and transit divisions. He was part of the team that worked out the Department of Justice settlement agreement, and he says he agrees completely with its goals. The problems in Ferguson Missouri, O'Dea told reporters were not solely due to Mike Brown's death at the hands of Officer Darren Wilson, but went deeper. The community in Ferguson had already lost trust in their police force. Community relationships should be at the heart of police work, he said.

O’Dea said he has four priorities for the bureau:

“The first is to focus on a relationship-based policing philosophy,” he said.  I can’t direct that our members work on this crime, or that crime, or on this issue and it work for everyone. The needs of the downtown community are different from the Cully and Killingsworth community and different from the needs at 162nd and Burnside. What I can do that works is to direct our members to build trusting relationships with all parts of the community and have them work together on their priorities  to build safer and healthier neighborhoods to better meet community needs.”

“I also want to focus on increasing communication and collaboration both internally and externally. This will be critical in managing all of our major initiatives.

On the weekends O’Dea builds homes as a Habitat for Humanity volunteer. He lived in the city of Portland for 20 years, he said, although he has now moved just south of Oregon City so his wife can have a horse. Asked what would be the worst thing Portlanders might discover about him, he said that after 28 years on the force, Portlanders know pretty much everything about him.

O’Dea joined the Portland Police Bureau in 1986. He has been a uniformed patrol officer, sergeant, lieutenant, and captain.  Read O’Dea’s bio here.

The Human Rights Commission issued a statement saying O’Dea is known for his support of equity and inclusion.

“Chief O'Dea's compassion, empathy, and understanding; qualities that will serve the Police Bureau and community well,” commissioners said in a press release.

“We hope to see him continue the successful work that has been accomplished around racial equity through the HRC's Community and Police Relations Committee, such as the institutional racism trainings that have been provided to command staff and sergeants. Asst. Chief O'Dea has been instrumental as both a member of the CPRC and command staff in moving this work forward and has communicated his vision of a shift from enforcement policing to relationship-based policing.”

Chief Reese said now is the right time for a handover, as the bureau finalizes its commitments to the Department of Justice settlement agreement by hiring a Compliance Officer/Community Liaison and creating a Community Advisory Board.

“I've been the Chief of Police for more than 1,600 days. In dog years, that’s a lifetime!” Reese said. “It has been a humbling, challenging and rewarding experience.”

Reese said he’s proud of what the bureau has accomplished during his time as chief.

”During my tenure, the Police Bureau has increased its hiring of women and minority police officers by more than 40 percent,” he said. “We created better policies on the use of force and systems of accountability that align with community values. The Police Bureau’s use of force is down 32 percent, and over the last four years, citizen complaints have also dropped.”

Mayor Hales thanked Reese for his service to the city and said his achievements include the new law enforcement training center, new discipline guidelines and training procedures and greater diversity on the force.

“I thank Mike Reese for his leadership and his service,” Hales said. “Mike saw us through the investigation and settlement with the DOJ. This was a key milestone for our city and the community’s relationship with the bureau.”