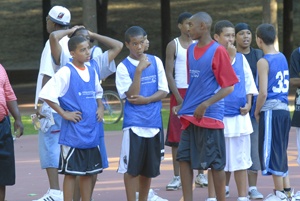 Students from the 2006 All-American Youth Basketball Camp participate in basketball clinics at Irving Park. The camp, which starts June 18, runs from noon to 3:50 p.m., Monday through Friday, for eight weeks each summer.

E.J. Penn grew up in a family with five children and a working mother, so he gets it. He understands that mothers and fathers are sometimes so busy trying to make ends meet that keeping track of their 12-year-old during the summer is nearly impossible.
That's why Penn developed the All-American Youth Basketball Camp, a summertime program sponsored by Portland Parks and Recreation and First Step Sports Academy for boys and girls ages 5 to 18.
"It's so important that kids have a place to feel completely comfortable," Penn says. "Having that place will help keep them out of trouble."
Penn's basketball camp has been that place for hundreds of Portland youth.
"If we can just get kids off the streets, we can make a difference," Penn says.
And after a day of running, jumping and practicing their lay-ups, these children – and young adults – are too tired to do much more than collapse on the couch, Penn says. 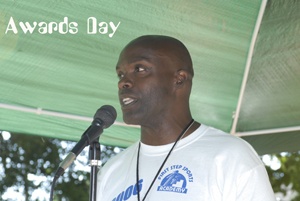 "They're tired out at the end of the day. They eat lunch with us and we keep our eyes open," Penn says. "We've been fortunate that we've never had any trouble."
The All-American Youth Basketball Camp's philosophy is "all about helping kids feel good about themselves" while keeping them safe, giving them a chance to release their physical energy and building up their self-esteem.
"We have one instructor for every eight kids and we encourage our teachers to listen to the kids," Penn says. "In five years, we've never had to have the police come out – and that's pretty amazing for an inner-city program like this."
As a father of young men, Penn also understands why some parents won't let their children go into Portland's parks by themselves.
"There's a lot of bad influences out there and a lot of intimidation," Penn says. "Our program lets these kids spend all day in the park in a safe, intimidation-free place."
The camp has been rated the most affordable basketball camp in Oregon. A four-week session costs $125 and includes a daily lunch. Or, for $200, you can attend for eight weeks. Scholarships are available.
The camp schedule begins at noon with a lunch and a guest speaker, and goes until 3:50 p.m. Monday through Friday. The first session begins next week on Monday, June 18, at Irving Park in Northeast Portland.
The camp, which had nearly 250 participants last year, fills up fast and Penn says it has continued to grow each year since its inception in 2002.
The program is always looking for parents, teachers, grandparents and other community members to volunteer and donate.
"The most important thing for us is to just keep the momentum going," Penn says. "We hope that someday people will realize the benefits of giving our kids a safe haven."
For more information about the All-American Youth Basketball Camp, visit www.pdxAllAmericanSports.com or call Penn at 503-753-4450.

For other kinds of summer camps click on this link