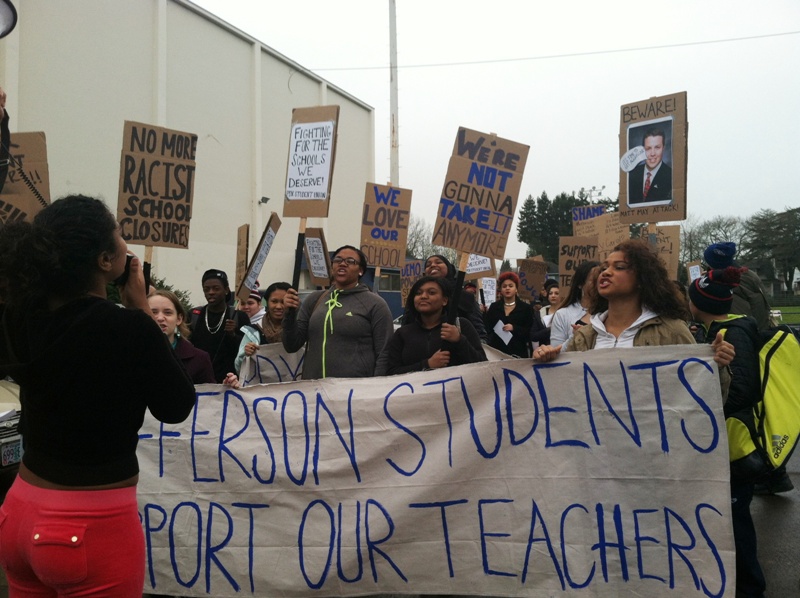 PHOTO: Students at Jefferson High School demonstrated in support of their teachers during contract negotiations in 2013

The fine won’t take money out of the school district, said Christine Miles, spokesperson for the school district. But it means that nearly $1.5 million in federal disability funds must now be spent on prevention efforts with younger students.

“We need to spend the money on helping all students who may need behavioral support,” Miles said. “We have known for years that this is an area we have to work on.”

Miles said Portland Public schools has already taken steps to fix the problems and is using prevention funding to hire restorative justice coordinators, as well as for its Courageous Conversations initiative and other strategies aimed at reducing conflict and discipline in schools. See The Skanner News story on restorative justice in the Parkrose School District.

Under the Individuals with Disabilities Education Act school districts receive funds for special education. Portland Public Schools received $16.8 million in 2012-21013 and $14.5 million in 2013-2014. Because of the disproportionate disciplining of Black students in the special education program, 15 percent of the 2014-2015 funding – $1.5 million—must be redirected to an early intervention program called Coordinated Early Intervention Services.

A memo to the state special education directors from William W. Knudsen, acting Director of the federal Office of Special Education Programs, says moving the funds can benefit all students by helping improve behavior in all schools.

“The rationale for using IDEA funds for CEIS is based on research showing that the earlier a child’s learning problems or difficulties are identified, the more quickly and effectively the problems and difficulties can be addressed and the greater the chances that the child’s problems will be ameliorated or decreased in severity.” Knudsen says.

But North Marion appealed, and a review found the problem was not because of district practices, but because of a high number of DHS placements into the school district.

This article was corrected to add that the statistics which triggered sanctions were from the 2012-13 school year.