Weigh in on the Candidates for Monitoring DOJ settlement with Portland 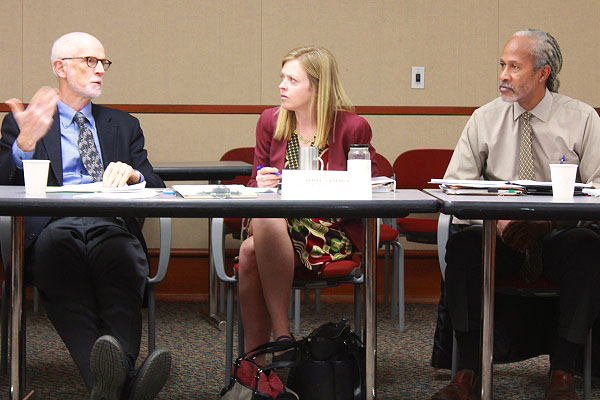 When Judge Michael Simon approved Portland’s Settlement agreement with the Department of Justice, the city agreed to hire a Community Liaison/Compliance Officer to oversee progress and report back to the report. Now, for the next 30 days, the city is asking the public to comment on the three candidates under consideration.

The candidates attended a public forum Monday, and answered questions from a Selection Advisory Committee that includes representatives from nonprofits, including the Urban League, the Albina Ministerial Alliance Coalition, Portland Commission on Disabilities and others.

“Everyone’s input is important as the city works toward fulfilling the settlement agreement,” Mayor Charlie Hales said in a statement.

“The community members who committed their time to the interview process were tremendous. Now I ask the community as a whole to participate and contribute feedback on the candidates.”

The candidates under consideration are:

● John Campbell of Campbell DeLong Resources Inc., a Portland firm that has already worked with Portland Police Bureau on landlord-tenant training and other contracts.

● Dennis Rosenbaum of Chicago, a University of Illinois professor, and executive director of the National Police Research Platform, which oversees a seven-university research program in 100 U.S. cities.

● Daniel Ward of Portland, executive director of the Oregon Drug and Alcohol Policy Commission and a former CEO of Metro Crisis Services Inc. in Colorado.

The selection process has been criticized as failing to attract enough qualified candidates. Just 12 applications were received for the $240,000 a year contract job. Jason Renaud of the Mental Health Association of Portland, for example,  refused to join the selection advisory committee arguing that the city needs to try again.

Still, just one person on the selection advisory committee, mental health advocate and Portland State University adjunct professor Beckie Child, said none of the three candidates meets the requirements of the job.

By concensus the selection advisory group ruled out Rosenbaum, largely because he and his team would remain in Chicago. The team said they would send a representative to meetings in Portland but Rosenbaum himself would make no more than occasional visits.

Michael Alexander of the Urban League of Portland said Rosenbaum didn’t know the city and hadn’t done his research.

“He made a data error in his presentation when he said there are only a few Latinos in Portland,” Alexander said. 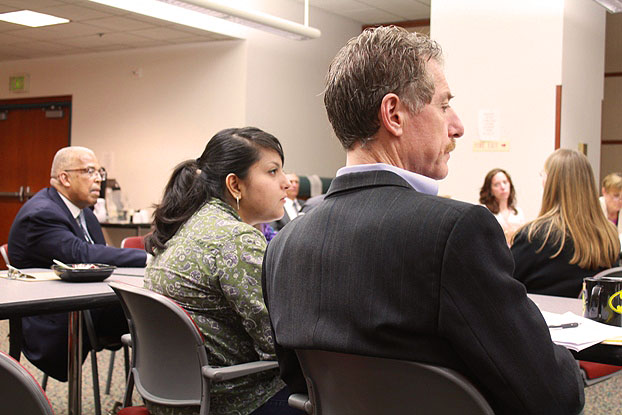 Five people expressed a preference for Ward, who while he did not show up with a team, won people over with his frankness, calm demeanor and ability to speak about issues directly. Ward was praised for doing his homework and understanding the settlement agreement and the issues.

“I was struck by his candor,” said Carl Goodman. “I sat on the profiling committee when we were discussing the disparity in stops and he was the only one who said there’s a problem.  For me his honesty and sincerity and his passion for the job: I don’t think you can buy that passion.”

Ward was the only candidate to come alone without a team, however, which raised concerns for some.

“I’m concerned that he came in his own,” Child said. “He hasn’t identified his team and no one person can do this job.”

Ward’s suggestion during the presentation that he could work with volunteers only added to Child’s doubts.

“This is real work,” she said. “It requires a paid staff not volunteers.”

Campbell’s team was viewed as strong on data crunching and diversity but criticized for not doing its homework on the settlement and failing to answer the questions.

“It was more a marketing presentation than a capacity and skills presentation,” said Alexander. “It was missed opportunity.”

Patricia Ten Eyck of NAMI Multnomah found the Campbell group’s presentation disorganized. And like others she felt the team was insensitive when talking about people with mental health issues.

“It was painful to listen to because he just got so lost and confused,” she said. “Not once did he talk about utilizing or reaching out to the community. It was almost dismissive.”

Bob Joondeph said the team demonstrated, “ an us versus them attitude when it came to the mental health community.”

The selection advisory group sent its recommendations to the mayor. Hales however, is not obliged to follow their advice.

The presentations to the Selection Advisory Board will be available soon on the mayor’s website.

The page will include links to the applications and a link to video of the interviews, which aired live on Channel 30.

CORRECTION: This article has been corrected to identify Katelyn Randall as the committee member in the photo.