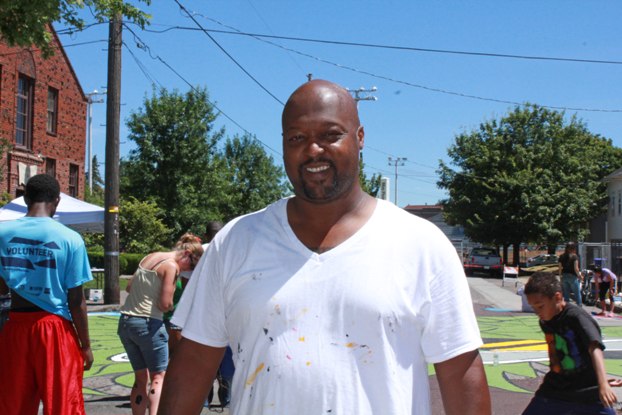 PHOTO: Choo Fair a longtime member of the gang task force, now renamed the Community Peace Collaborative, worked with youth on a street painting at Killingsworth Court this summer

Portland’s gang task force has changed its name. About 100 task force attendees voted, Sept. 26, to rename the task force Community Peace Collaborative, with the tag line: A Coalition for Violence Prevention and Achievement.

“We can have courageous conversations and truthful communication if we operate from the intention to serve and treat each other with the utmost respect.”

Police reported on three shooting incidents that left at least two people injured. One of the men injured has been shot at four times previously and wounded three times. The total number of reported gang violence incidents to date this year is 94, up from 77 at the same time last year.

Other news reported at the collaborative includes:

Police Officer Chris Burley has been promoted to sergeant.

The East Multnomah Arts & Culture Council is hosting a Youth Solutions Summit at Gresham High School on Saturday, Sept. 27 at 10 am. Doors will open at 9:00 a.m. for participants to register. A free lunch will follow the key note address and youth-led discussions. Key note speaker is artist Fabian Debora, a counselor/mentor with Homeboys Industries in Los Angeles.

The Boystrength program is looking for additional volunteers. The program teaches middle school age boys how to respect themselves and others in different situations. The 120-hour training teaches skills in working with youth on issues of safety, self-esteem and relationships. For more information call 503-823-7467, or email [email protected]

Portland State University is seeking to hire sworn campus police officers who will be armed. PSU is currently the only public university in the state which does not have sworn officers. University leaders will present the recommendation to the faculty senate on Oct. 6. A town hall on campus safety for students, faculty and staff is scheduled for 9 a.m. Oct. 7, in the Smith ballroom. A board vote is scheduled for Dec. 11.

Four collaborative members: Antoinette Edwards, Commander Kevin Modica, Ericka Pruitt of Multnomah County’s Department of Community Justice and Capt. Dave Hendrie went to the 6th Annual Black Men’s Healing Conference in Minneapolis. They told the task force that they learned about the impact of trauma in Black communities. Children exposed to domestic violence, threatened or hurt by family members, lacking in safety food and other basic needs, recreate that cycle of trauma as they become adults. Black males often experience multiple traumatic events. Speakers at the conference included a man whose mother and brother were murdered in front of him when he was 10 years old and then the next day another family member was killed.

“The conversation challenged a lot of what we end up believing as police officers,” said Modica. “What I realize is that if you’re doing work with our kiddos and adults you’ve got to do your own work... You need to take care of yourself before you start trying to correct somebody else.”

The four said they had come back hopeful and with new tools to share in their workplaces.

Officer Marci Jackson reported that the “Enough is Enough” groups are still working on creating support for victims of violence and safety for witnesses.  More about Enough is Enough here. Jackson also shared applications to sit on a citizens panel to discuss selection of a Compliance Officer/Community Liaison for the city who will monitor the progress of the Department of Justice civil rights settlement with Portland Police Bureau and report to federal Judge Michael Simon. The process drew criticism after only 12 applications for the $250,000 a year position were received.

Sidney Morgan, restorative justice coordinator for the county’s department of Community Justice explained how restorative justice programs work with youth.  When harm is done, a victim and an offender can choose to sit down and talk about that harm and how to repair it. The program is completely voluntary for both parties and involves: Holding the offender accountable; Giving victims a voice; and repairing the harm done.

“I love this philosophy because it makes sense,” Morgan said. “Our schools are finally starting to use this process and that’s going to have a huge impact on kids getting kicked out of school.”

Morgan says she is exploring the idea of a Neighborhood Accountability Committee based on restorative justice principles and wants community members to weigh in. Interested?  Email [email protected]

Emanuel Price, a restorative justice coordinator with Portland Public Schools said parents with felony backgrounds face barriers to volunteering in schools. Currently a background check that shows a felony record disqualifies parents even from attending a field trip with their child. Price said a parent recently broke down in tears after finding he couldn’t attend a trip with his student. He had a long-past drug dealing conviction that drew extra penalties because it was within 1,000 feet of a school, even though he had no idea that the school was nearby. Negotiations are underway to find a solution.

School board member Bobbie Regan said she was aware of the problem and work to find a solution is underway. Regan said Superintendent Carole Smith has named three priorities for the coming year: making sure every child is reading by 3rd grade; raising the high school graduation rate; and reducing disproportionate discipline of students of color.

A defense lawyer who attended the meeting said she was interested in providing legal education classes that empowered people by explaining their rights and responsibilities when encountering a police officer, in housing, work and other important areas.