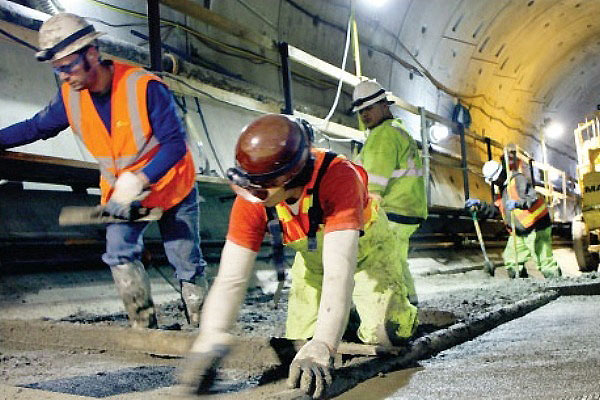 A group of African American workers is suing the companies hired to dig Sound Transit's light rail tunnel between the University of Washington and Capitol Hill in Seattle, saying they were assigned demeaning tasks and quickly fired because of their race.

The eight workers filed a complaint in U.S. District Court this month, years after first raising the issue. Sound Transit investigated the allegations and said in 2012 that it found troubling indications that black workers were more likely to be let go than their white colleagues at the University of Washington site.

While 82 percent of white workers dispatched there remained employed after five weeks, just 43 percent of black workers did, according to a statistical analysis commissioned by the agency.

Contractor Traylor Bros. Inc., of Indiana, is being sued on its own and as part of the consortium Traylor-Frontier-Kemper, which got the $314 million contract completed last year. Its general counsel, Steve Owen, said Tuesday the company denies the allegations.

In a detailed response to the Sound Transit investigation, the company said it and a local labor union had trouble finding workers who were qualified for highly specialized work in the tunnel. Several workers sent to the site by the union wound up being dismissed for performance or safety concerns, Traylor said.

The company also said that overall people of color made up 28 percent of the consortium's workforce — in excess of the 21 percent goal set out in its contract with Sound Transit.

"In the final analysis, the only thing TFK is guilty of is insisting on fully qualified Laborers to maintain the quality and timeliness of its work and, more importantly, the safety of its personnel," it said.

Pearson said the superintendent who fired him gave him no explanation for his termination, and he had a swastika tattoo on his hand. Sound Transit's investigation determined it was a Native American peace symbol, not a symbol of white supremacy, Owen said.

The lawsuit, filed by Seattle attorney Stephen Teller, seeks class action status, with lost wages and damages to be determined at trial.