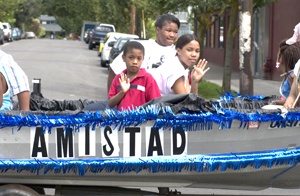 The Rose Festival. Good in the 'Hood. July Fourth. With so many other celebrations occurring this summer, it's almost easy to overlook one of the oldest celebrations – the Juneteenth commemoration.
This year, community members have their choice of several Juneteenth celebrations. Starting Saturday, June 16 — three days before the actual Juneteenth — Portlanders can dance, watch a parade, eat great food and celebrate the emancipation of slavery.
The Juneteenth celebration came about on June 19, 1865 when General Gordon Granger and his army of Buffalo Soldiers informed slaves they had been technically free since the enactment of the Emancipation Proclamation in 1863. Texas had been largely insulated from the war and had been a place many southern slave owners had traveled to wait out the war.
Ms. Cora Peoples started Portland's modern day celebration on June 19, 1945. She encouraged fellow workers at a shipyard to celebrate their freedom before getting back to work. The tradition continues to this day.
Starting what she hopes to be an annual event, Tisha Stigler, the new store manager of the St. Johns Wells Fargo branch, is organizing a large Juneteenth celebration with free food, art and vendor booths, activities for kids and entertainment from 10 a.m. to 6 p.m. Tuesday, June 19 at 5730 N.E. Martin Luther King Jr. Blvd. (the Wells Fargo branch near the Safeway store). Members of the bank's African American Diversity Council, also known as "Checkpoint" is helping Stigler organize and run the event.
Throughout the day, people in the community will come to share their experiences and stories, including Cora Peoples, Joyce Harris, Lolenzo Poe, Sam Brooks, Marcus Mundy and Paul Knauls Sr. Entertainment will be provided by such acts as The Light, a gospel group and the World Stage Theatre Company.
Other events include the People's Juneteenth Community Freedom Trail Parade and Festival, an annual event featuring a two-mile parade route that ends in festivities. This year, parade organizers are encouraging participants to dress like their favorite person from Black history or from the Civil War.
The parade will begin at 12:30 p.m. on June 16 near the corner of North Jarrett Street and Martin Luther King Jr. Boulevard. From Jarrett Street, the parade route will go south on MLK Boulevard until Knott Street, where it will continue north on the opposite side of MLK. Then the parade will turn west on Killingsworth Street until it reaches Jefferson High School, where festivities will begin.
Yam Yam's Southern Barbecue also will host gospel singers to commemorate the holiday on June 17.
And if you happen to be in Seattle from June 15 through June 17, where Juneteenth is now an official state holiday, visit the Central Area Chamber of Commerce's celebration at Pratt Park, 20th Avenue and East Yesler Way, for a celebration of love, joy and peace. Music will be performed by the Grammy award-winning Robert Redwine. Friday is youth day, with an ice cream social for children, as well as music, poetry, games and an opportunity to win free T-shirts.
Beginning at noon on Saturday, June 16, there will be a Juneteenth parade in Seattle. Or, check out the "live Gospel explosion" on Sunday, June 17. For more information about Seattle's Juneteenth celebration, call 206-322-8296 or 206-325-2864.