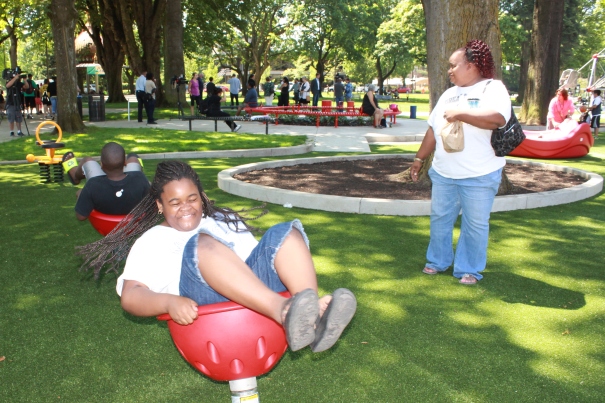 PHOTO: Anjanae Mesa-Sanchez, 9, and her brother Jalam Taylor, 1, play in newly renovated Dawson Park as their mom Angela Taylor watches. Parks, shopping, housing and transit are part of the mix that makes neighborhoods in Portland walkable

Portland has won an international award for its work on climate change. Ten cities across the world won Climate Leadership Awards at a ceremony in New York. The awards were created by the C40 Cities Climate Leadership group, and manufacturing company Siemens.

A statement from Mayor Hales office, quotes Eduardo Paes, mayor of Rio de Janeiro who is the chair of the C40 group.

“I commend the winning cities for their leadership and commitment, and am confident that their knowledge and experience will help drive other cities to implement on-the-ground solutions faster and more efficiently. Through cooperation and collaboration, cities continue to deliver the results that are having a global impact.”

Portland was selected as the winner of the Sustainable Communities Award because of its success in creating walkable neighborhoods linked to affordable transit, Mayor Hales says in the statement.

“In Portland, the basic idea is to develop the centers of our existing neighborhoods into highly walkable, lively commercial districts, making it easy and convenient to get to the schools, shops, jobs, parks, coffee and beer that make Portland a great place to live, work and play.”

By 2035 Portland wants 80 percent of Portlanders to live close to shopping and transit. The strategy is designed to improve urban living while reducing car trips and carbon emissions that hurt our environment.

The awards were created by the C40 Cities Climate Leadership group, and manufacturing company Siemens.  Seattle’s Climate Action Plan made the city a finalist in the Carbon Measurement and Planning category.

Amsterdam created a $103 million investment fund for sustainable energy projects that focused on small businesses. The fund lowers energy bills and has been credited with a 20 percent reduction in carbon emissions over 10 years.

Barcelona created an information and communication technology project that monitors the environment across the city making the information public for all to see. The C40 award says, “It will help the city save energy and reduce pollution thanks to sensors monitoring water levels for irrigation, garbage containers, parking, people flow, energy efficiency in city buildings, etc.”

Buenos Aires made a commitment to reducing the amount of waste that goes to landfills by 83 percent in 2017. The city has already reduced waste with an ambitious waste treatment program that separates waste and prioritizes recovery and recycling.

London’s  ‘New Taxi for London’ project aims to reduce emissions from the city’s iconic black taxi fleet by up to 100 percent in central London and around 75 percent in the rest of the city. The city is working with manufacturers to build a zero-emissions taxi and has retired 3,000  of the older taxis. Around 60 percent of London’s air pollution is from transportation.

Melbourne’s ‘Urban Landscapes Climate Adaptation Program’ is designed to cool the city by 4°C and reduce its vulnerability to drought. The project will increase green space to 7.6 percent of municipal space and double the tree canopy.  Melbourne already has planted 12,000 new trees and added 10,000 square meters of green space.

Seoul’s  ‘Make Seoul a City of Sunlight’ project aims to reduce its greenhouse emissions along with its dependence on coal, oil and nuclear energy. The goal is to turn the city into a huge solar power plant that will help it become energy independent.

Shenzen’s ‘New Energy Vehicle Promotion’ project aims to add 35,000 zero energy vehicles to its fleet, making it the largest zero-emissions fleet in service worldwide. Between 2009 and 2013, the project helped Shenzen cut carbon emissions by 160,000 tons. Shenzen is now ranked in the top 10 for best air quality in China.

Taipei rewarded low-pollution vehicles and encouraged cycling and transit use. The city has reduced pollution emissions and improved air quality and public health.