Seattle to Drop all Tickets for Public Use of Marijuana 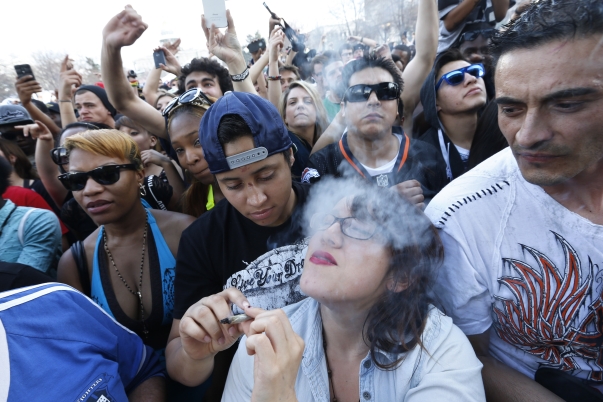 In this April 19, 2014 file photo, partygoers dance and smoke pot on the first of two days at the annual 4/20 marijuana festival in Denver. The annual event is the first 4/20 marijuana celebration since retail marijuana stores began selling in January 2014. Colorado is now selling more recreational pot than medical pot, tax records released Wednesday, Sept. 10, 2014 show. The state sold $29.7 million worth of recreational marijuana in July, the most recent data available, slightly higher than the $28.9 million worth of medical marijuana sold in the same month. (AP Photo/Brennan Linsley, File)

SEATTLE (AP) — Seattle's elected prosecutor said Monday he's dropping all tickets issued for the public use of marijuana through the first seven months of this year, because most of them were issued by a single police officer who disagrees with the legal pot law.

In a briefing to the City Council on Monday, City Attorney Pete Holmes said he is moving to dismiss 100 tickets issued by the Seattle Police Department between Jan. 1 and July 31. His office also said it would be seeking a refund for 22 people who have already paid their $27 ticket.

Through the first six months of the year, a single officer wrote about 80 percent of the tickets, writing on one that he considered the pot law "silly." The officer, Randy Jokela, was temporarily reassigned, and the department's Office of Professional Accountability is investigating.

Seattle Police Chief Kathleen O'Toole asked Holmes to drop the tickets Jokela issued, but Holmes told the council he intends to drop all of them, saying it would be easier procedurally and would make for cleaner data as the city tracks the enforcement of the legal marijuana law.

Holmes also said educating the public about what the law allows is more important than collecting fines.

"The goal all along has been not to issue tickets as much as to change behavior," he said.

Washington voters legalized marijuana in 2012 and authorized its sale at licensed stores to adults over 21, but public use remains illegal. In Seattle, the City Council set the fine at $27, equivalent to the penalty for drinking alcohol in public.

About one-third of the tickets have been issued to blacks, who make up about 8 percent of Seattle's population. Many have also gone to homeless residents; 40 percent of those cited listed addresses at transitional housing facilities. Council members say they are concerned about those numbers and want to keep tabs on who is being cited under the law.

Police brass told the council on Monday that the department is issuing a new directive on enforcing the public marijuana consumption law. The guidance advises officers to give verbal warnings before issuing citations whenever practical, not to seize the marijuana, and not to issue citations for marijuana use on private property, even when the use can be seen by others.