NEW YORK — Fox News Channel apologized on air last week for running tape of a different U.S. congressman while reporting on the indictment of Rep. William J. Jefferson, D-La., on bribery charges.
The network ran footage of House Judiciary Committee Chairman John Conyers instead. Both congressmen are Black.
Fox blamed the mistake on a 22-year-old production assistant hurriedly grabbing the wrong videotape. Fox's Washington bureau chief, Brian Wilson, said he was mortified by the error.
On Tuesday, Fox News anchor Martha MacCallum said of the Jefferson story: "We mistakenly ran the wrong videotape accompanying that story and we apologize for that error." 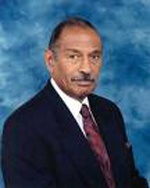 Conyers apparently did not accept the apology.
"Fox News has a history of inappropriate on-air mistakes that are neither fair, nor balanced," he said Tuesday. "This type of disrespect for people of color should no longer be tolerated. I am personally offended by the network's complete disregard for accuracy in reporting and lackluster on-air apology."
Wilson said he called Conyers' office on Tuesday to apologize. He said he spoke to a press secretary and asked what he could do to make amends, including coming to Conyers' office to apologize in person. No one got back to him, he said.
Conyers' press representative, Melanie Roussell, said the congressman was upset that Fox's on-air apology did not say specifically what the mistake was.
Fox News Channel has become a political issue itself recently, with Democratic presidential candidates refusing to appear in a debate sponsored by the network.