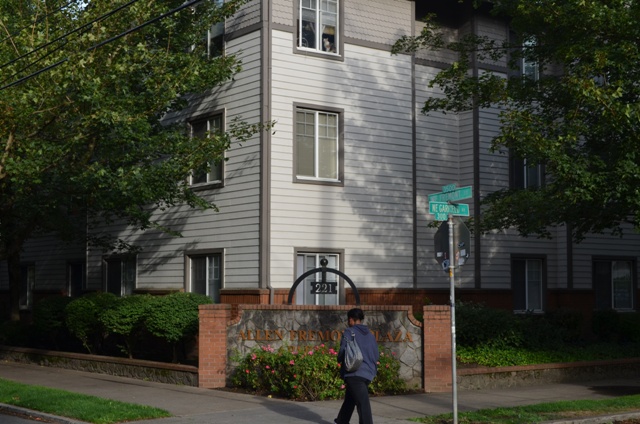 Rents are Allen-Fremont Plaza are currently about half the market rate, and Recko says rent restrictions written into the mortgage will keep it that way until the year 2075. Photo by Jerry Foster

REACH Community Development Corporation this week announced a deal to preserve 64 senior citizen apartments in the Boise-Elliot neighborhood at low rents locked in for the next 60 years.

The deal involves the Allen-Fremont Plaza, developed and operated as an independent living facility by the General Baptist Convention of the Northwest.

A nonprofit housing agency, REACH received a $1.7 million grant from the City of Portland's Bureau of Housing to buy and fix up the complex next year, and REACH officials stress that no current residents will be pushed out or asked to move in the transition.

"GBC took bold action in originally building the Allen Fremont Plaza,” said REACH CEO Dan Valliere. “Now the City, along with GBC Inc. and REACH, are furthering broader preservation efforts to create long-term opportunities for lower-income residents and help them remain living in their homes in N/NE Portland."
Originally built in 1997, Allen-Fremont Plaza was specifically developed by the Black church association to ensure affordable housing options for the elderly in the historically African-American neighborhood.

But the task of operating the facility proved too much for the church organization, which over the past decade faced two lawsuits over alleged failure of its emergency medical pull-cord system – which has since been removed, REACH officials say.

The Baptist organization has been working to sell the facility to REACH for two years, which makes for more stability for residents because REACH is already in the business of operating senior housing, says spokeswoman Laura J. Recko.

Both parties were adamant about keeping existing residents in their units and maintaining the site as a solution for Black seniors facing displacement from Boise-Elliot.

Rents are Allen-Fremont Plaza are currently about half the market rate, and Recko says rent restrictions written into the mortgage will keep it that way until the year 2075.

Currently, a majority of residents are African-American seniors living on less than 30 percent of median family income – about $14,600 per year.

“It’s really disruptive to people’s lives if they have to move to Gresham, and then try to travel back into the neighborhood for their church activities or social lives,” Recka said.

“We want people to know there is still a nice apartment building in the neighborhood that is affordable for seniors.”

REACH says this is especially important in Boise-Elliot – which is close to the rapidly gentrifying Williams Avenue corridor and part of the Interstate Urban Renewal Area.
A significant goal is to help more traditional residents avoid “sudden, dramatic rent hikes.”

“The plan is that nobody will be displaced, we will be making the transfer as smooth and transparent as possible,” Housing development Director Michelle Haynes told the Skanner News.

“Rent will stay at current levels and we are committed to keeping the rent as low as we can,” Haynes said.

The organization plans about $500,000 in renovations, mostly energy efficiency upgrades, new roofing, interior unit upgrades, and exterior paint. The work is expected to take about six months.
For more information about REACH go to http://reachcdc.org.