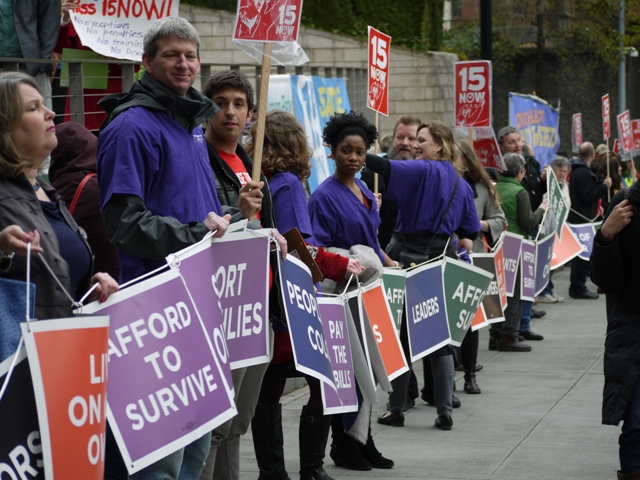 Supporters of an increase in the minimum wage to $15 an hour encircle Seattle City Hall on Wednesday April 23; weeks later Seattle Mayor Ed Murray announced a phased-in $15 wage.  The minimum wage movement is growing and Oregon advocates hope to post a victory in the state legislature next year.

Avakian’s office says about eight percent of Oregon’s overall workforce will benefit from the modest wage jump. But while living wage advocates applauded the hike, most – including Avakian himself – said it really isn’t enough.

“I’m really pleased to see so many folks at a national, a state and a local level talk about what the minimum wage ought to be, and that discussion really starts with who is your minimum wage worker today,” Avakian told The Skanner News after the updated wage figure was released Wednesday.

“It’s no longer a student who’s working a few hours after school to earn some pocket change – 62 percent of our minimum wage workers nationally are women, many of them over the age of 30, many of them with children at home,” Avakian said.

“Should any worker who’s working full time, especially with a family, be living in poverty?”

The Oregon Center for Public Policy agreed, giving the state a pat on the back for tying the wage floor to the cost of living, but, again, stressing that poverty wages hurt the state’s economy in the long run.

“Today’s economic reality — rising income inequality and too many working families living in poverty — speaks to the need to go beyond cost-of-living increases,” said the OCPP’s policy analyst Janet Bauer

“While Oregon voters were wise in tying annual adjustments to inflation to make sure that our lowest-paid workers don’t fall further behind, we need a minimum wage increase that makes forward progress.”

The OCPP cites the Basic Family Budget Calculator created by the Economic Policy Institute in calculating that a two-parent, two-child family living in rural Oregon needs each adult to earn a full-time wage of about $27 an hour “for a modest, yet secure standard of living.”

On the other hand, the OCPP says the most basic level of subsistence would be a minimum wage of about $11.70 “to lift a family of four with one parent working full-time out of poverty.”

Earlier this month, the 2014 Annual Job Gap Report issued by the Alliance for a Just Society found that even a $15 minimum wage is inadequate to provide a better life for families.

The study showed that in Oregon, the real minimum wage is now $15.96 per hour, and that a single adult with two children in Oregon needs $30.75 per hour – not just to stay out of poverty, but to “thrive,” meaning purchase a home, send a child to college, or weather unexpected health problems.

Avakian said this week he is pleased with increased awareness and activism on the issue and that he is looking ahead to the 2015 legislative session in hopes a bill will land before lawmakers.

“So as the discussion in Oregon now turns to whether our minimum wage should be above the poverty line, I’m very encouraged that may be where we’re heading,” he said.

“The call to action is out there, we’re helping with the discussion that will take place when the legislature comes back in January, as to whether or not it’s time for Oregon to adjust its wage floor.”

Avakian has consistently championed a stronger wage, even testifying before a U.S. Senate labor committee last year about how the move has bolstered small businesses in Oregon; he testified that since indexing Oregon’s minimum wage to inflation in 2003, the number of small businesses has grown from 79,000 to about 88,000 today.

The key, Avakian argues, is that putting more money in the pockets of the poorest families raises their buying power in the economy; that means small businesses still have customers even when prices go up for goods and services.

“As an example, if we were to raise the minimum wage to just above the poverty line for a family of four, that would give a raise to over 450,000 Oregonians and it would add about $188 million of additional consumer purchasing power to our local economy,” he said this week.

“So it’s something that would benefit our workers, our families, and our local businesses – all.”

The Bureau of Labor and Industries estimates the new hike gives minimum wage employees working 30 hours a week will each have $234 more to spend on goods next year, putting more than $25 million in new consumer spending into the marketplace.

“Today's announcement that the 2015 minimum wage will be $9.25 is welcome news,” said Oregon AFL-CIO President Tom Chamberlain. “Oregon has long been ahead of most states by ensuring our lowest-paid neighbors aren't falling even further behind.  But in reality that amounts to $19,240 a year, or $1,603.33 a month, to help families make ends meet.  More and more new jobs pay minimum wage or close to it.  It's time for us to do more.

“The average age of a minimum wage worker, nationally, is 35.  It's not much different here in Oregon.  We can't expect a person to raise a family on $19,240 a year.  That's why the Oregon AFL-CIO is calling on the 2015 Legislature to give Oregon workers a boost.  Every family in our state should have a fair shot; the first step is ensuring every person who is working full time can afford to put food on the table.”