Scanning the crowd at the Oregon Shakespeare Festival's recent showing of August Wilson's "Gem of the Ocean," Bridget B. Sullivan saw three other African American faces and one person of Asian descent.
The rest of the audience was White and elderly.
"And it's not just me noticing this," Sullivan says. "The actors see it and the donors are starting to notice."
Bringing people of color and younger crowds to the world-renowned Oregon Shakespeare Festival is, starting July 5, Sullivan's mission.
As the festival's new audience development manager, Sullivan will reach out to community leaders in Portland, Seattle, Oakland and Sacramento to bring a new crowd to the annual festival, which draws attention from theater enthusiasts throughout the world.
With 11 plays in three theaters, the Shakespeare Festival draws people to Ashland nine months out of the year.
"I was surprised by Ashland," Sullivan says. "It reminded me of the town I grew up in (Glens Falls, N.Y.). I grew up in a White area in a town of about 20,000, which is comparable to Ashland."
Sullivan, 42, has been a theater buff since her mother took her to see plays in New York City at the age of 9. She had been dancing for 36 years and, as a professional event producer, had a working knowledge of what went on behind the scenes too.
But witnessing the creative spirit that runs through the theater and university communities in Ashland caught Sullivan by surprise.
"The air just seemed lighter there," she says of Ashland. "You could just sense it walking around the town."
As a young, professional African American woman who has spent the majority of her adult life living in fast-paced, diverse cities like Atlanta, and traveling to countries like Brazil and Germany for her events planning business, Sullivan wondered if taking a job in a small town like Ashland would become boring.
"But I still get to travel," she says. "I'll be traveling to Portland and Seattle and into California."
And Sullivan's newly created position is an important part of the festival's current push for more diversity. Already, the Oregon Shakespeare Festival has greatly diversified its actors company – with one-fourth of the actors being people of color. Now the festival's directors want to see more diversity in the staff and the audience.
"The objective is to make the (festival) more recognizable for different types of people," Sullivan says.
To do that, Sullivan will coordinate local leaders in cities throughout the West Coast who will pull together groups of young people, African Americans, Latinos or Asians to take trips to the Ashland festival.
With more than a decade as an event producer under her belt, Sullivan understands how to market the festival to people who may not realize that the word "Shakespeare" doesn't have to mean stodgy, old White men.
"It's not just Shakespeare you know," Sullivan says. "They're putting on August Wilson plays ... and my objective is to educate people on the 'gem of the ocean' that the Oregon Shakespeare Festival is."
Interested in helping the Oregon Shakespeare Festival increase their audience diversity? Contact Diane Holt, OST's director of audience development, at [email protected] or at 541-482-2111,  ext. 248. 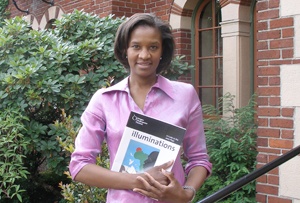 right: Bridget B. Sullivan, the new audience development manager for the Oregon Shakespeare Festival, holds a copy of OSF's "Illuminations" manual, which describes the 11 plays being performed during the 2007 season.
The festival's directors have been trying to increase diversity among the actors, staff and audience. Twenty-five percent of the actors are people of color and Sullivan's position was created to help increase audience diversity – she hopes to increase participation among people of color as well as younger generations.
This year's playbill includes August Wilson's "Gem of the Ocean," directed by Timothy Bond, in the Angus Bowmer Theater, now through Oct. 27.