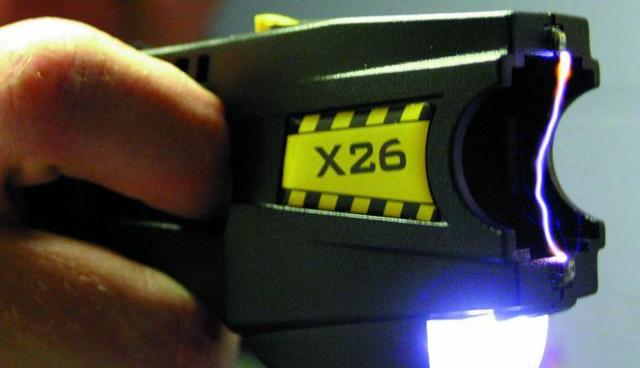 Police tased a 16-year-old boy in North Portland early Sunday and charged him with two counts of assault, disorderly conduct, harassment, resisting arrest and interfering with a police officer. The boy was evaluated at hospital before being taken to juvenile detention. Police also arrested his 20-year-old brother, Giovanni Dmitri Gurule, and charged him with disorderly conduct, resisting arrest and interfering with a peace officer.

Much of the incident was captured on video by youth who were at the scene of the arrests just after midnight on Sunday Sept. 14, at North Philadelphia and N. Ivanhoe in St. Johns. Videos posted to social media sites quickly went viral and have been viewed thousands of times.

According to the police report, written by Sgt. Jason Lile, about 30 youth were gathered at the scene.

The video shows officers holding the boy, struggling with him, using his hair to wrestle him to the ground and eventually tasing him. Voices of the youth can be heard throughout the video, asking why the police are arresting the boy, protesting their use of force, swearing in fury at officers and asserting their right to be on the sidewalk.

Portland Police Chief Mike Reese has ordered a review of the whole incident by the Professional Standards Division.

Police released tape of four calls that came into 911 reporting a crowd of youth causing a disturbance in the vicinity of Cathedral Park. Listen to the calls here.

The first call describes a crowd of about 10 youth kicking a car. The car’s front passenger tire was flat and a rear mirror was broken, which the caller attributes to the youth but did not witness. The second call describes a group of youth fighting and yelling at North Philadelphia Ave. and Willamette Blvd. close to the police station. That caller reported hearing someone saying  the words “kill that n****.” A third caller said a group of about five youth tore up some decorative fencing around her tree. She confronted them and was threatened. This caller thought the youth were white. A fourth caller described a group of eight or more male youth arguing near Cathedral Park. That caller heard someone talking about a “shot.”

No weapons were discovered during the arrests.

Deanna Wesson-Mitchell community liaison for the Portland Police Bureau said police investigating the calls stopped a group of youth in the area.

“They were trying to get everyone’s identification, they needed to know who everyone was,” she said.

Asked how she interprets the videos Wesson-Mitchell said: “It looks as though at some point the young man didn’t want to be arrested and started resisting, which set off a chain of unfortunate events.”

Portland Police Sgt. Jason Lile, who completed the report on the incident, said he saw four officers at the scene when he arrived along with a crowd of around 30 people: Officers Jimenez, Sutton, Hornstein and Hughes.  Lile says in the report that the person videotaping was a danger to officers. Link to pdf. file of incident report

“I noticed the other subject…appeared to be using a cell phone to film the incident,” Lile writes. “This is a huge danger for officers who are struggling with a suspect. Officers are then forced to divide their attention between the suspect they are fighting with and other suspects who pose an unknown threat to them. Physical interference to include assaulting officers has happened and is a real threat.”

Lile reports telling the person taping to move back, which he notes police have the power to do under city code. He says he added a charge of interfering with a police officer to a disorderly conduct charge when that person was arrested by two other officers who arrived on the scene: Officers Konzcal and Ciri.

Lile also reports that he is the person seen in the video pulling the youth by his hair. He justifies this saying,

"As they (Officers Hornstein and Hughes) were on either side of him I had no good area other than his head to grab onto and took hold of his hair. (He) had a large afro-style haircut. I know from training and experience that controlling a subject’s head is an effective way to control their movements. I attempted to pull him downwards as we ended up moving toward a dirt planting area.”

Lile says the boy “violently resisted” and at one point tried to punch him. He concludes, “This incident had the makings of a riot.”

Lile said as the boy continued to resist, “I saw Officer Hornstein trying to deliver hand and knee strikes to (the boy) and feared one of us was going to get seriously hurt.”

That, Lile says, is when he decided to use a Taser since other less lethal options such as pepper spray were not available. Lile says he warned the boy, “approximately three times, “get on the ground or you are going to get tased.”

Lile tased the boy on his back and he fell forward. Lile says he sustained a knee injury as the boy fell on him. The boy was then handcuffed and checked out. Fire bureau personnel found his heart rate was very high and he was taken to hospital for evaluation.

The victims in the case are listed as:

Officer Hornstein’s account of the events is also in the report. She reports that the group of youth were described as black males and black females, although that description does not appear in any of the released  911 calls. Hornstein noticed the boy who was later arrested trying to leave the scene. She and Hughes ran and held him. She says she and Hughes attempted to deescalate the situation and calm the boy but he swore at them to let go of him.

Hornstein says she and Hughes began trying to take the boy down. She delivered knee strikes and  “3 or 4 punches to his body, “still trying to stop (him) from fighting with us. When that didn’t work, Hornstein says she changed tactics, and tried to get him off balance by wrapping her arms around a leg and lifting. At that point she felt the boys arm around her neck.

“I was now in fear that (the boy) was going to strangle me, and if successful he could place himself at great advantage to cause me harm and potentially render me unconcscious,” Hornstein says. “I was able to slip out of (his) hold and deliver 3-4 punches to (his) body.

Hornstein says as the boy continued struggling she again felt his arm around her throat and felt her hair pulled. She says she also sustained a punch to her face.  She delivered two more knee strikes and then moved to pull her out her taser. She says she told the boy he would be tased if he didn’t get on the ground.  She says she put away her taser because Lile was in a better position to use his.

Officer Hughes also contributed a report on the incident. Hughes reported encountering Sam Morse, 21 who had blood running down his leg. Hughes said Morse told him he tripped and fell. Highes also notes that he and Hornstein are among the officers who have been trained in enhanced crisis intervention.

Lile, who wielded the Taser on the unnamed 16 year old high school student, has been implicated in three use-of-force cases that have been reported in the media:

--  In 2003, Portlander Dontae Marks was with a friend who was accused by Portland Police officers of being drunk. According to an article in the Willamette Week, Marks  “protested to an officer on the outskirts of the scene that his pal wasn’t drunk. The officer told him to leave. Marks refused. Another cop, Jason Lile, repeated the order and drew his taser, positioning the red dot of its laser sight on Marks’ chest.” According to the police report, Marks’ back was to the officers when they first Tased him, but he walked away as the pulses hit him. He then “assumed a fighting stance,” half a dozen police officers reportedly then piled on him. “While cops punched him, pepper-sprayed him and clubbed him with a telescoping baton, Lile touch-stunned him with at least 10 more five-second cycles,” Willamette Week reported. Marks was eventually cleared of all wrongdoing in a jury trial. In 2007, Marks won a $60,000 settlement with the City of Portland over the use of force in his arrest.

--  In 2004, Portland attorney Heather Bissell stopped along with a friend to observe an arrest; officers at the scene reportedly challenged her and her boyfriend, testifying that the two appeared to pose a threat to the arrest scene. The beating Bissell took at the hands of police officers prompted her to sue the City of Portland. After being exonerated in court – as well as in an Oregon Bar investigation – Bissell won nearly $90,000 in a settlement, including her legal fees.

--  In 2011, Lile was one of two officers who shot and killed Thomas Higginbotham, 67, at the former Lucky Car Wash near Southeast 82nd Avenue and Powell Boulevard. The officers said that Higginbotham was carrying a knife and that he had threatened a security guard at the abandoned site. A grand jury cleared the officers of wrongdoing.