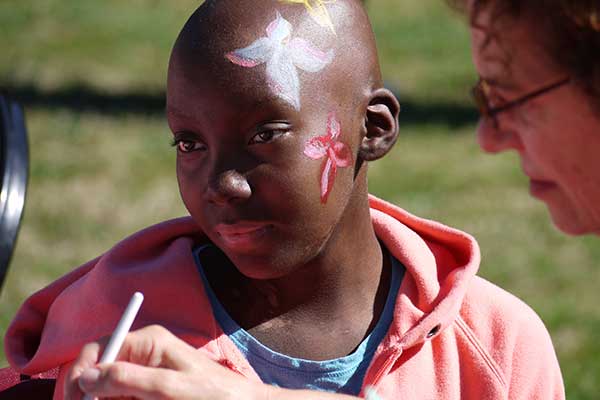 When Marcia Taylor’s daughter was still a newborn in 1961, something happened that changed her family forever.

“She was fine that night when I put her to bed, happy, and the next morning she didn't wake up right away.

“When I bent over the crib to kiss her, she was burning up. And so I just wrapped her up and ran across the street and said to my neighbor, ‘Please take me to the hospital because my baby's really sick.’

“It was evening when the doctors came in and they told me she had sickle cell anemia.  I didn’t know what it was, but the only thing that registered was -- no known cure.”

Sickle cell anemia -- an inherited disorder that causes red blood cells to form an abnormal crescent shape -- is a tough illness to track. While in the past it was known as the “black man’s disease,” more current research has shown it impacts people across all races. Its sufferers live with chronic pain and struggle to maintain normal lives.

In fact the pain can be so acute that patients can’t communicate well with hospital staff when they show up in the emergency room; advocates are increasingly concerned about how many sickle cell patients are turned away and accused of being “drug seekers.”

That’s why community health advocates as well as families in Oregon and Washington are working to step up their outreach to new generations of sickle cell sufferers as well as potential blood and bone marrow donors.

The run is held in conjunction with the Red Cross Annual Charles Drew Blood Drive, held right at the church at the same time.

Although in the United States this blood disorder affects primarily African Americans, millions more people across the globe inherit the trait including people with ancestry from Africa, South or Central America, the Caribbean Islands, India, Saudi Arabia, Mediterranean Countries, such as Turkey, Greece and Italy.

In the United States, sickle cell disease affects 1 out of every 500 Black births, and health experts say that’s why African-American donors can often provide blood that is the best match -- because blood from donors of the same ethnic background as the recipient is less likely to cause complications, especially for patients like those with sickle cell disease.

There is no real cure, only ongoing treatment with blood transfusions and blood marrow transplants.

“It is estimated that sickle cell disease affects as many as 100,000 people in the U.S.,” says Red Cross Communications Manager Jared Schultzman. “Many of these patients face a lifetime of blood transfusions to help reduce the risk of stroke, damage to major organs and other complications that can arise as a result of sickle cell disease.”

Taylor, now the executive director of the Sickle Cell Foundation of Oregon, started volunteering with the group in the 1960s.

Back then, the Portland Black Panther Party – which ran a health clinic and a children’s breakfast program -- made sickle cell outreach a priority with public events and a door-to-door educational campaign.

That effort was famously led by Taylor’s good friend, legendary community organizer Willie Mae Hart, one of the original founders of the first Sickle Cell Foundation who had lost a granddaughter to the disease. After a period of years that group disbanded, but Taylor formed another in 1980.

The group was created in 1994 and their programs include NW Sickle Cell Camp, where 35-40 kids with sickle cell travel to Vashon Island for a 4-day camp experience each year during the third weekend in August.

Seattle organizer Foxy Davison spearheads the group’s outreach – a lot of which goes towards supporting the children’s activities.

“These kids can’t really go to regular summer camp,” she says. “A lot of what we do is directed towards fundraising to give the children that special experience.”

The key is to diagnose sickle cell sufferers in infancy, Taylor says, because the damage done by the disease can shorten sufferers’ lives; with the proper diagnosis patients can live longer.

With that in mind the Sickle Cell Foundation of Oregon is partnering with Legacy Health to provide free and low-cost sickle cell tests for those who can’t afford them.

The other important piece is that more Black blood donors and bone marrow donors are needed.

More on the Sickle Cell Foundation of Oregon is available by clicking here.

Make an appointment to donate blood with the Columbia-Willamette Red Cross by calling 1-800-RED-CROSS or go to www.redcrossblood.org, using the sponsor code “charlesdrewpdx.”