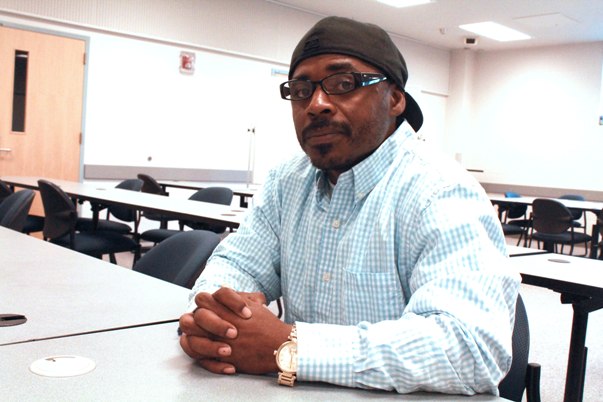 PHOTO: William Brown plays the central character in the pilot "The wHOLE." Director Ramon Hamilton said he knew he didn't need to audition anyone else after seeing Brown.

Locked inside a cramped cell, actor William Brown was playing a prisoner in solitary confinement. At the end of the scene director Ramon Hamilton called, "Cut!"

Hamilton moved to open the cell door, but the key wasn't in his pocket.

A moment later Hamilton located the key and opened the cell door. And a cameraman was in the cell too. But for that moment Brown felt the panic that hits when you're locked up in "the hole."

Some memories will always be locked inside his body.

"It's a jail inside jail," he says of solitary. "When you are there, there is no hope, no nothing. It's rough. It's ugly. At the minimum you can begin to lose your sanity."

Brown is the star of a pilot show filmed by the production company Think Ten inside Multnomah County's Wapato Jail. He plays prisoner Marcus Edwards in a prison drama called The wHOLE. Hamilton and Jennifer Fischer, who co-founded Think Ten, say they hope to turn the show into a series, and shoot it in Wapato.

Multnomah County built Wapato Jail in 1996 at a cost of $58 million. But with no funding to run it, and a drop in crime that made more jail beds unnecessary, the county has never figured out what to do with it for the long term. Meanwhile it's available for rental.

So can a drama about solitary confinement attract an audience? Fischer thinks the story and the acting will pull viewers in.

"It's entertainment," she says. "We think anyone who enjoys watching drama, and high-quality television, is going to enjoy this."

And Brown says he's having a blast with his role.

"The story is magnificent and crazy," he says. "Magnificent because of the way it was put together and crazy because they have me playing it."

Brown had never had an acting lesson in his life until he joined the Arts in Corrections program at California Men’s Colony in San Luis Obispo. Program director Deborah Tobola spotted Brown's talent and went on to cast him in several roles.

"Honestly, there is another person inside me who asks me to step aside and I just go with the flow. It allows me to be me, but to be something else too. I'm living vicariously and I love it."

After Brown's release Tobola left the prison program, which was defunded in 2010. She created The Poetic Justice Project, a theater company that works with youth and adults who have been in prison. Tobola contacted Brown and cast him in roles written by Shakespeare and John Steinbeck, as well as in new plays.

Born and raised in South Central Los Angeles, the father of three says one of the hardest roles he's had to play was a snitch. But audiences liked him so much, the play was changed to give his character a happier ending.

"It showed me I could be lovable and hated at the same time," Brown says.

Hamilton wanted an actor who knew the reality of solitary confinement. Tobola recommended Brown. After Brown's audition, he didn't bother to audition anyone else.  He knew he had his man.

Hamilton and Fischer began working on the project, in 2013, inspired by prisoner protests against solitary confinement at Pelican Bay prison in Northern California. At the same time, another prison drama, Orange is the New Black was making a stir. But Think Ten's vision has always been more gritty and real.  It's important to them that The wHOLE is accurate in every detail.

They hope the show will be must-watch television. And they hope to throw some light on the abuse of solitary confinement in America's prison system.

International human rights experts have called for solitary confinement to be abolished. Studies have shown that even 15 days in solitary can cause irreversible damage to prisoners' mental health. Yet according to the Center for Constitutional Rights, 80,000 U.S. prisoners are kept in isolation every day, some staying for years.

The center has filed a class action lawsuit on behalf of prisoners in Pelican Bay prison, who have been kept in solitary confinement for between 10 and 28 years.

Five Mualimm-ak, an advisor and co-producer for The wHOLE, spent five of the 12 years he was incarcerated in solitary --once, for eating an apple core. The charges against him were eventually overturned, he says, but not before his mind and spirit had been damaged.

"Nobody survives. It's the destruction of a human being. People think solitary confinement is for the worst people, but that's not true. It's used for disciplinary infractions, on people with mental illnesses. And if you don't have a mental illness when you go in, you'll have one when you get out."