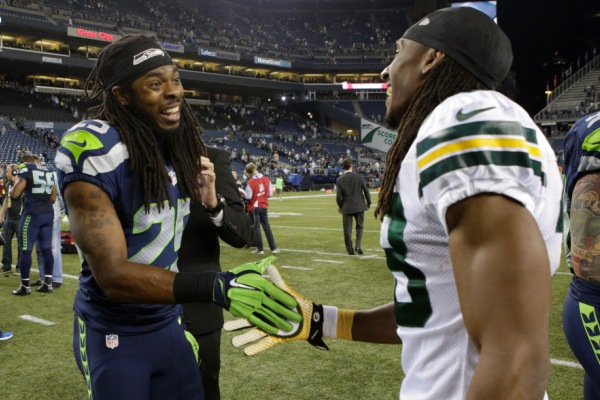 SEATTLE (AP) — The ceremony was brief, lasting less than 10 minutes. The Seattle Seahawks celebrated the accomplishment of winning their first Super Bowl title last season, unveiling the championship banner and giving their fans one more opportunity to savor the feat.

Then it was over, and the process of trying to repeat started in impressive fashion with a 36-16 romp over Green Bay on Thursday night.

Marshawn Lynch ran for 110 yards and two touchdowns, Percy Harvin had 100 combined yards rushing and receiving, and the Seahawks dominated Aaron Rodgers and the Packers.

Their effort against the Green Bay — a popular pick to contend in the NFC — will only reinforce the belief Seattle is still the favorite in the conference.

"We got a lot of playmakers just looking to get the ball," Harvin said. "Every time we get a chance, we're definitely looking to make the most of it."

Wilson was outstanding in the first half, including a 33-yard touchdown pass to Ricardo Lockette, and added a 15-yard TD pass to Derrick Coleman in the fourth quarter. Wilson finished 19 of 28 for 191 yards.

Rodgers struggled as the Packers were held to 255 total yards, the third-fewest for Green Bay since the start of the 2012 season. Rodgers was 23 of 33 for 189 yards and was isolated to one side of the field. He looked almost exclusively for Jordy Nelson matched up against Byron Maxwell and never threw in Richard Sherman's direction.

"I think that you get wake-up calls and then you get drill-sergeant-kick-you-out-the-bed calls and I think we just got kicked out the bed onto a cement floor, and it hurt," Green Bay defensive lineman Mike Daniels said.

Here's what we learned from Seattle's impressive debut:

BEAST MODE: Despite holding out from the first week of training camp and getting limited carries during the preseason, Lynch doesn't appear to be on the verge of a drop-off. Seattle punished the middle of Green Bay's defensive front with Lynch regularly not getting hit until he was past the line of scrimmage. He averaged 5.5 yards per carry and recorded his 20th 100-yard game since the start of the 2011 season. That's the most of any running back in the NFL.

"Obviously we were the more physical team today, offensively and defensively. I saw supposedly some of the best players in the league not want to tackle Marshawn Lynch," Seattle defensive end Michael Bennett said. "Of course nobody is going to say nothing about that, but I seen a lot of guys whiff on tackles that should have been two-yard gains and they're supposed to be the best."

DEEP ENOUGH: The Packers don't seem concerned that the left knee injury suffered by right tackle Bryan Bulaga in the second quarter will be a major setback. But it's clear the drop-off to backup Derek Sherrod was significant. Seattle picked on Sherrod in the second half with Cliff Avril getting a key fourth-down sack to stop a Green Bay drive in Seattle territory and later Bennett's sack and forced fumble that ended up being recovered by Sherrod in the end zone for a safety.

THE HARVIN EFFECT: Everyone knew Seattle was going to use Harvin in a variety of ways and they were all on display in the first half. Harvin was used on quick screens, fly sweeps, in traditional wide receiver patterns and he even lined up next to Wilson as a running back at one point.

Harvin finished with 11 offensive touches for 100 combined yards. He had seven receptions for 59 yards and four rushes for 41 and that doesn't take into account the attention Green Bay paid Harvin when he wasn't getting the ball.

"We had a ton of different ways to show how we're fitting him together in the offense," Carroll said. "There's a bunch of other stuff that we'll do, but he's such an explosive athlete and so tough."

UNLUCKY LACY: The talk for Green Bay was while they were going to play more up-tempo on offense it would also be more balanced with Eddie Lacy entering his second season. Lacy was essentially a non-factor getting held to 34 yards rushing on 12 carries and leaving in the fourth quarter with a concussion. Take away his longest run of 15 yards and Lacy had 11 carries for 19 yards.

PUNT SAFETY: With the departure of Golden Tate in the offseason, who would take over returning punts was one of Seattle's big questions entering the season.

Earl Thomas did little to ease worries about that position in the opener.

Thomas returned his first punt 3 yards, then fumbled the second when Green Bay's Davon House was blocked into Thomas by Richard Sherman. It was a ball that Thomas likely should have called for a fair catch but took the risky chance in traffic.

"In both of those, he's so aggressive with it, he got vulnerable that second time and he got pounded the first time too," Carroll said. "We'll keep working on it and get better."