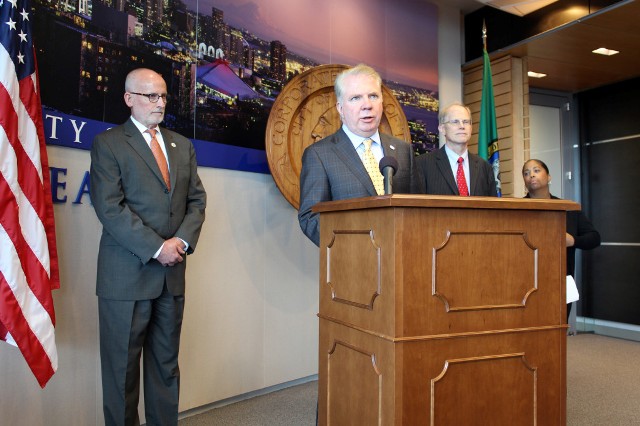 At a press conference Tuesday, Seattle Mayor Ed Murray said, 'Ninety percent of white fourth-graders read at grade level compared to 56 percent of African-American students, and when you open those numbers up by gender they actually get worse. These contribute to the incredible achievement gap that we face as a city.' Photo courtesy City of Seattle

The Mayor cited statistics showing just one third of African-American and Latino students and one half of Native American students don't graduate on time compared to 14 percent of white students.

If approved, Murray’s new department would be budgeted at $48.5 million, including 38 employees who will help manage the $30 million per year brought in from the voter-approved Families and Education Levy.

Murray said this week the new department is designed as a one-stop resource for educational programs serving k-12 as well as, for the first time, community college institutions.

“The department of education and early learning is not a competitor to the Seattle school district,” Murray said Tuesday. “Instead it is a way for us to streamline the various projects that we work on so that we can collaborate and deliver educational opportunities to our children, two young adults, pre-K through high school.”

The announcement comes as two competing pre-k measures have landed on the November ballot – the $58 million city-backed property tax hike to fund public pre-k programs, and I-107, the Yes for Early Success proposition that would cap childcare costs at 10 percent for low-income families and mandate a $15 minimum wage for childcare workers, among other things.

The Council last year called on the mayor to develop a budget proposal to beef up  education and early learning programs to get ready for universal pre-k.

“Right now the current state of education in the city of Seattle is a state that is unacceptable,” Murray said this week.

“Here in Seattle–and this is despite great efforts on the part so many people who work in education -- despite that, 54 percent of African American children, and 40 percent of Latino children live in poverty compared to 6 percent of white children.

“Four-fifths of African-American students in Seattle public schools receive free or reduced lunches -- that is compared to one out of 10 for white children,” Murray said.

“Ninety percent of white fourth-graders read at grade level compared to 56 percent of African-American students, and when you open those numbers up by gender they actually get worse,” he said. “These contribute to the incredible achievement gap that we face as a city.”

Murray said this announcement is the first in a series that he is rolling out before his budget submission to the City Council on Sept. 22.

The cost and effort of building a new freestanding department was minimized in the plan released Tuesday.

Existing employees will be tapped to fill most positions in the new department, which would consolidate:

Murray also said the Early Learning department would fold in better relations to community colleges – which would involve nine new positions in outreach, quality control for childcare programs and increased data collection on their operations.

“Our responsibility for providing high-quality early care and education does not stop with adults want to graduate from high school,” he said. “This is why this department will also reach out and works to coordinate programs with our cities community colleges and our vocational programs.

“It's time for Seattle city to develop a relationship with those institutions of higher education.”

"We look forward to working with the Mayor and the new Department of Education and Early Learning to partner on behalf of our Seattle students," said Interim Superintendent of Seattle Public Schools Larry Nyland. " We are pleased the city will partner with us to meet our goals for student success."