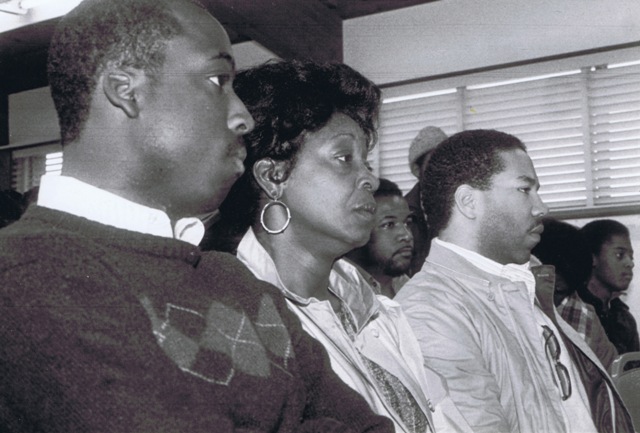 The family of Lloyd 'Tony' Stevenson after the death of their son. Stevenson was an African American security guard who in 1985 was mistaken for a suspect by a Portland Police officer; the officer killed Stevenson after putting him in a chokehold. After a public outcry, police officers responded to community concerns by creating "Smoke 'Em, Don't Choke 'Em" t-shirts. Photo by The Skanner News

As all eyes are turned towards Ferguson, Mo., last week also marked 16 years since one of Portland’s own incidents of civil disturbance, in which hundreds of African Americans marched on the Portland police chief's house near Irving Park in Northeast Portland the week of Aug. 17, 1998.

It wasn’t the first riot in Portland, but the protests outside Chief of Police Charles Moose’s home triggered what many hoped would be a more meaningful police accountability system; those hopes so far have proven to be elusive even today.

As the rioting continues in Missouri, some local authorities are looking inward at their own communities, including Portland Police Chief Mike Reese who issued a statement Thursday about building community trust in law enforcement.

In the interest of preserving our city’s history, The Skanner News has pulled from our archives a series of past articles and photos following this significant incident of civil unrest – and a bit of what led up to it.

You will find in our website’s History section articles written by Tonya Y. Parker and Will Emerson, who reported for The Skanner News in the 1990s, as well as current staff covering the years-long court cases and complaints that stemmed from that time. Find links to the stories below.

Also for those interested in the longer term history of these issues, the Oregon Histprical Society has made available to the public the complete text of Leanne C. Serbulo and Karen J. Gibson’s award-winning, authoritative report published in the OHS journal, “Black and Blue: Police-Community Relations in Portland’s Albina District, 1964-1985.”

In some ways the 1998 incident involved the very best and brightest members of the community.

Daniel Binns, the Northeast Portland resident whose birthday celebration was repeatedly shut down by law enforcement that year, was a charismatic and popular entrepreneur -- a recording artist and event planner and all around well-loved guy.

Police officers on the scene were some of the best on the force, including then Sgt. Dave Anderson; also then Sgt. Harry Jackson (the public square on Alberta and Martin Luther King Jr. Boulevard is named for him today); Officer Victoria Burton (then Wade), the now retired Crisis Response Team founder; and then-Commander Derrick Foxworth, later to be named Chief of Police, who headed the police operation that sent every available squad car hurtling towards Chief Moose’s modest bungalow.

Moose, a controversial leader, went on to serve as chief of the Montgomery County, Md., Department of Police. He led the investigative team that caught the D.C. sniper in 2002, and caused a sensation when he insisted on writing a book about it which was later turned into a film – he was forced out of the job as a result.

The first protester shot by police that night with a beanbag gun, Travis West, was an Olympic wrestler and national champion in the field of Greco-Roman wrestling. He placed second in the 1991 and 1994 world team trials, and won a bronze medal at the 1992 Pan American championships, an international competition. He passed away in 2003.

And finally, devoted young mom, Kendra Rosser, was Maced in the face as was her baby son; she struggled to hold her infant as police officers ripped him from her grasp while a television camera filmed. Arresting Officer Kristi Gustafson later admitted to cuffing Rosser, telling her she was “stupid” and that she hoped she lost custody of her son. Officials sent baby Kevin into state custody, where he was soon recovered and housed with his grandmother until Rosser was released.

For years, Portland Copwatch supported Rosser in her efforts to get an apology from the city. Twelve years ago Copwatch invited The Skanner News to meet with Rosser; we met with her again more recently at her grandmother’s apartment — in almost the same building she lived in 16 years ago.

In the more recent interview, Rosser – who has since changed her name and converted to Islam –specifically wanted our readers to know that night changed her family’s lives forever.

Her son is significantly impaired even as a teenager, and will never be able to live on his own or even leave home without supervision.

“I have never recovered from that,” she told The Skanner News. “My son will never recover, and my whole family still deals with the effects every day.”

Rosser testified to the US Department of Justice in its investigation of the Portland Police standards and practices a few years ago – but in the end the DOJ chose not to sanction the bureau for racial disparities in enforcement practices, only focusing on its use of force against people in mental health crises.

As we watch the tragic events in Ferguson unfold, there are some powerful themes that have come to the forefront and have emerged as critical reminders for all cities and law enforcement agencies across America.
The importance of building greater trust between police officers and the people we serve is paramount; particularly among those communities whose relationship and history with the Police Bureau has sometimes been strained. Trust is a perishable commodity; it's something we must work on every day.
At the Portland Police Bureau, we have had a lot of conversations recently about building legitimacy for the work we do in protecting the public. These unfortunate circumstances in Missouri help make clear to me, and hopefully to everyone in our community, that creating a police-community relationship built on trust is our most important obligation.
A law enforcement agency must mirror the community in which it serves. In Portland, we continue to increase diversity as we hire new police officers. We are committed to building strong partnerships with community members and agencies that assist us in serving and protecting the people of Portland.
Police use of force and the policies and training that accompany it need to be continually reviewed and improved upon. The Portland Police Bureau has made significant changes to our use of force policies and training aimed at reducing use of force and improving de-escalation tactics. Our use of force numbers have declined over the last four years, and all uses of physical force are investigated by a supervisor. Citizen complaints also have decreased.
Finally, communication, including listening, remains the key to better understanding. When we have an officer-involved shooting or high-profile incident, we are committed to transparency.
There is no daylight between our values as an organization and the values and expectations the community has for their police officers. This is important to all of us. Our Portland Police Officers go out every day committed to doing their very best to serve and protect our community. As an agency, we pledge to continue to develop and enhance our services to match our community's expectations.