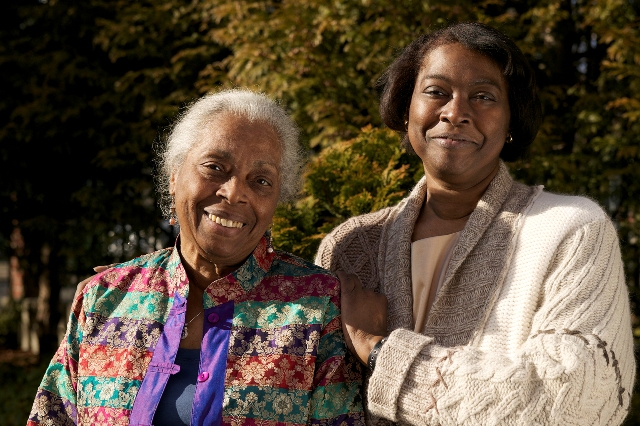 Robin Prentice, at right, with her mother Dee. Photo courtesy of LifeCenter NW

I was born and raised in the Seattle area and graduated from the University of Washington. While attending college, I never knew that the UW Medical Center would be responsible for saving my life.

In December 2005 I became ill with what I thought was the flu, but when it lasted longer than expected I went to the doctor.  They discovered that I had a serious case of pneumonia in both lungs and immediately admitted me to the hospital.  After a short stay I was released with a multitude of medications and an oxygen tank. Soon after that hospital visit, I found it difficult to breathe at all without assistance of the oxygen. Two months later, a biopsy of my left lung revealed severe lung disease.

Shock set over me. I was never a smoker, had no family history of lung disease and was not around toxic waste to my knowledge. I later learned that I had Pulmonary Fibrosis, “the scarring disease.” It can be caused by a multitude of factors, but in most cases doctors can't pinpoint the cause of the problem.

There was no cure. My only hope was a lung transplant.

On July 18, 2007 I was placed on the national transplant waiting list. A few months later, in October, I received my life-saving call.  They had found a match; I was going to receive a new set of lungs.  The timing was fortunate.  The disease had progressed rapidly in both lungs; any longer and I would have been too ill for surgery.

The most challenging part about being ill was being dependent on others. I had always been a hardworking, independent, person who was there for other people. My main caregiver was my mother, Dee. She was amazing. She took me to all my medical and physical therapy appointments, moved in with me and made all my meals. She literally put her life on hold for mine.

Since my transplant my life has changed in a number of ways.  I appreciate my family and friends more. I am closer to my family. I do not get upset over the small crises that occur in life. I do not take each day that I am given for granted. I feel a tremendous responsibility to my donor and my donor’s family for this wonderful gift of life.

I am fortunate to be alive and I want to make the most of it.  There are no words for how grateful I am for the support I have received, and the greatest gift; the gift of life.

Currently, there are more than 120,000 people waiting on the national transplant list.  For more information on organ donation, or to register to be an organ, eye and tissue donor visit www.lcnw.org.

African Americans make up 13 percent of the U.S. population and 14 percent of all organ donors, but they account for nearly 35 percent of all patients nationwide waiting for kidney transplants.

Minorities comprise 56 percent of individuals on the national organ transplant waiting list and 32 percent of living and deceased organ donors, while making up 36 percent of the U.S. population.

Many of the conditions leading to the need for a transplant -- such as diabetes and hypertension -- occur with greater frequency among minority populations.