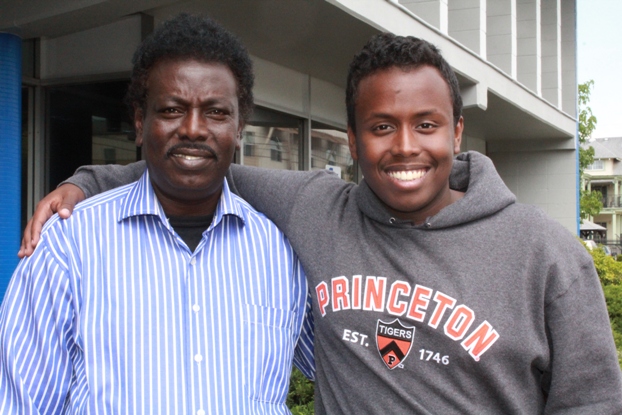 "I definitely got a taste of college life," Gedi says. " They wanted us to get experience writing the types of papers you write at college. And I ended up pulling three all-nighters to make sure I got my work done."

The entering senior spent seven weeks on the Princeton campus learning about colleges, financial aid, and academic research and writing. Classes lasted 5 hours, and the students were expected to be up by 6 a.m. and ready for breakfast at 7 a.m.

"They told us it would be a rigorous workload and it really was," Gedi says. "We had 100-page readings some nights and we had to write 1,200-word essays. I learned that time management is a really big deal in college. I feel this program really helped me get ready to go."

Still despite the boot camp atmosphere, he says, the group had fun and bonded.

Originally from Somalia, Gedi's parents fled the war zone in the 1990s and applied to the United Nations for refugee resettlement from Damascus, Syria.

"We had a life, businesses and restaurants in Somalia," says Gedi's father Dawood Mohamed. "But when the war started everything was destroyed. We ran away because we didn't want to be killed."

Ahmed was born in Damascus in 1996, the family's second child after his elder sister Mako. Then in 2000 they learned they had been accepted for resettlement in Portland.

"We were lucky; we got America,"  Ahmed says. "And my parents always told me, 'You can go a long way with education in America.'"

In Portland, Gedi's father worked in a warehouse before getting a job as a taxi driver, his current position. His mother Sadia is her kids' biggest supporter, Gedi says. Sister Mako, now 20, also worked hard in school and won a Gates Millenium scholarship in 2012. Mako is a pre-med student in her junior year at Lewis & Clark College.

Gedi says he still speaks Somali fluently because the family speak it at home. But he's also fluent in the computer languages,  html, css and python. He credits the MESA (Maths, Engineering and Science Achievement)  program for igniting his interest in computer science and helping propel him toward a career in computing.

Gedi started studying robotics through the MESA program, when he was a middle school student.

"They taught us about coding," he says. "I thought that was really cool and I started studying computer science on my own time." 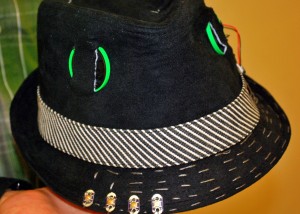 PHOTO: A musical hat that Gedi made with design partner Dustin Diep.

In his sophomore year at Franklin High School, Gedi and his science partner Dustin Diep entered a digital design competition. They decided to make a musical hat, so they cut some holes for speakers in a hat and rigged up a control for an mp3 player hidden inside the hat. Then they loaded up a collection of songs including: Twist and Shout; My Generation; and the then-current hit Gangnam Style.

"I thought this is so awesome that you can do this with code," he says.

At high school the awards kept coming. Gedi and Franklin's MESA club entered the 2012-13 MESA Day competition. They made a prosthetic arm, which came in second in the toss challenge, and first overall.

Then last year, his team from Franklin's Innovation Academy Club developed a game called Arena, that won the People's Choice Award in the Oregon Game Challenge.

Attending the LEDA program has helped Gedi crystallize his ideas for school and career, he says. He identified three groups of colleges with programs that match his ambitions and provide enough financial aid to make his dreams possible. Why three groups? The program teaches students to break down colleges into:

·         Challenge Schools, that are competitive but more attainable, and

·         Safety schools that are likely to accept LEDA students based on grades.

Among Gedi's "Reach" group are top private schools, such as Stanford, Rice, and Harvey Mudd. But he says several Oregon schools are among the 20 schools on his list.

"I want to be a software developer," he says. "I know careers in that field are expanding, and I just want to see how far I can go with this. If it involves computers or coding, I am happy."