Enough is Enough Campaign Tackles Culture of Silence on Crime 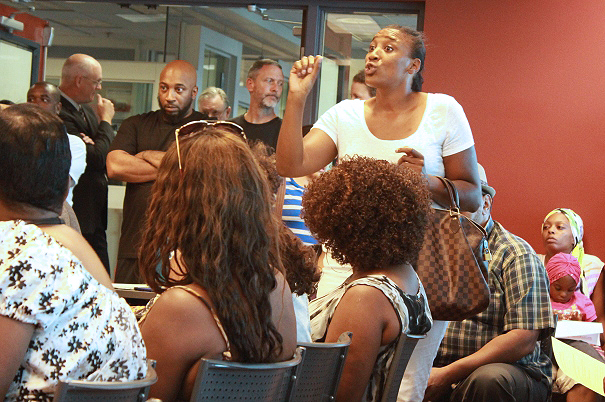 PHOTO: Ronisha Harris talks about her anguish at knowing witnesses are too scared to testify against her brother's killer. Harris called on authorities and the community to do more to provide safety to witnesses. Later, the witness support group agreed to tackle the problem. More about Ronisha Harris.

Dozens of people crammed into the community room at the Northeast precinct Monday evening to join the Enough is Enough campaign against violence in Portland communities. 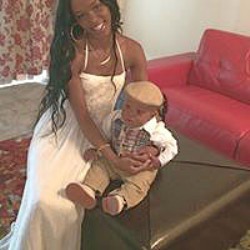 The latest victim, young mother Ervaeua Herring, 21, was shot around 5 a.m. Sunday Aug. 17 at her apartment in Southeast Portland.

Photo from Ervaeua Herring's Facebook page. She had a baby son who was not present when she was shot.

"I care about the issues in our nation. I'm watching Ferguson,"  said Antoinette Edwards, director of the Office of Youth Violence Prevention. "Where is our outrage? That somebody knocked on the door, knocked on doors until they found someone --a young woman --and gunned her down. Where is our outrage there?

"Do we value our lives? That's what this is about tonight."

Strong feelings were in evidence. In the first few minutes a disagreement arose, after Woody Broadnax asked what the mayor was going to do, and how much money the city would commit to the issue.  Broadnax left after Edwards said the meeting was about what the community wants to do, not about the mayor or money.  (To read about the mayor's prevention agenda click here.)

Edwards asked family members who had lost loved ones to violence to kick off the meeting. Perlia Bell spoke about the loss of her daughter, Asia Bell,in 2002 in a shooting that left Bell's husband blinded and four children without their mother.

"It's time to stop labeling (this as about) gangs and African Americans," Bell said. "Let's just say crime; let's just say victims; let's just say pain. Let's call it what it is...I'm glad to be at this meeting. I believe it will move forward and there will be changes." 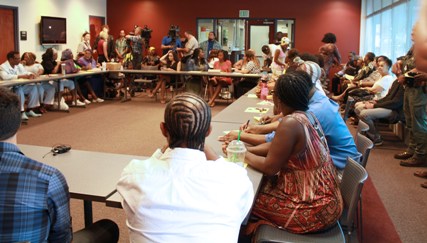 Bell was followed by other family members of victims.

Brenda Davis, who lost her son in 2009 to violence said she believed the community could make change.

"It's an awful, awful feeling to lose a child especially to senseless violence," she said. "The pain never ends, but the violence can."

Lucy Mashia whose son Leonard James Irving Jr. was killed in 2011, said she was there to make it stop.

"They've got so bold they're kicking doors in and murdering women," Mashia said.  "These are cowards. Men don't shoot innocent people. These people are cowards and they are holding our community hostage. People are not speaking up and telling what they know.

"My son's murder has not been solved and we know who did it. Tell me how that works. The whole community knows who killed my son but nobody wants to come forward. They're allowing those cowards...to hold them hostage."

Ronisha Harris, who lost her brother Durieul in a shooting outside the Fontaine Bleau nightclub in November 2013, also spoke of her frustration that none of the many witnesses had been brave enough to speak out. But she also said she was frustrated that witnesses had no protection.

"There's a difference between snitching and telling what you know," she said. "So let me explain something: When you tell what you know and our officials don't protect you, then you decide not to tell."

Harris says the shooter made a rap video celebrating the murder but police can do nothing about it.

The meeting broke into groups to address:

Counseling to deal with trauma in families of victims (and perpetrators)

Creating a "speakers bureau" of family members to tell their stories

Creating a media campaign to encourage witnesses to come forward

Working with witnesses and supporting them as they testify

Joining walking groups to engage with the community: Connected and Eleven:45 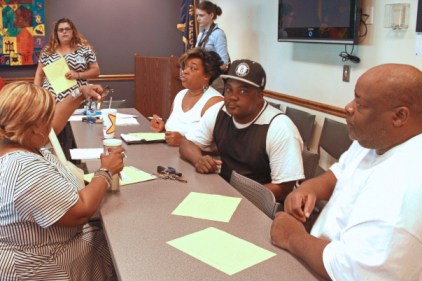 PHOTO: Suzanne Watson, Pastor Minnieweather, Larry Collins and others worked on crafting a message to encourage witnesses to speak out.

The groups began work at the meeting. The witness support group is looking at ways to give practical help to those whose lives may be in danger. More help is needed. To join a group or help out call the Office of Youth Violence Prevention at 503-823-4180.

Royal Harris, brother to Ronisha and Durieul, said if George Zimmerman could raise hundreds of thousands in a month, it should be possible to crowd-fund witness support money to help a family resettle in safety.

Edwards said it's up to us to change the culture of silence about crime. It starts with bullying and with parents telling children not to be a telltale when somebody beats them up or steals from them, she said. The message that children need to toughen up silences them and devalues their feelings, she said.

"What are we saying? Do we not deserve to have our feelings be heard?"

And the 100 witnesses who saw who killed Durieul Harris would not be "snitching" if they turned the shooter in.

"Snitching is: both of you all go into a store and you're stealing something. You're going to tell on him, and he's going to tell on you so you can get less time. That's not what this meeting about. This is about people sitting here hurting. And we're walking around being traumatized because of a street code, retaliation.

"it's about being accountable and having closure. And we're not throwing anyone away. I believe in Restorative Justice, but it's about accountability and what we do to address this.