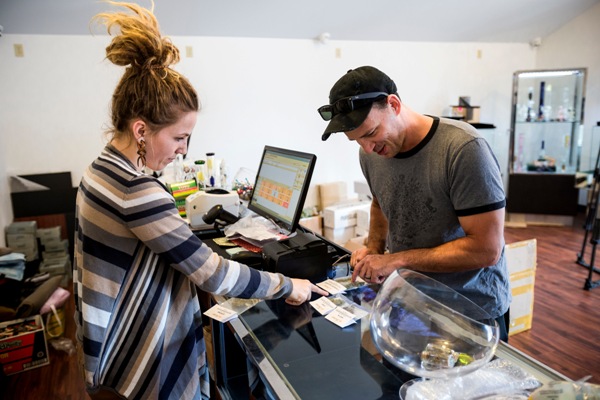 Lauren Downes, left, an employee at Seattle area's second recreational marijuana retail store, Herbal Nation, sells $99.64 worth of weed to customer Matt, no last name given, at the store's "soft launch" Monday, Aug. 11, 2014, in Bothell, Wash. The official grand opening is still Aug. 18, but the outlet wanted to give their loyal followers a shot at buying legal weed while they finish detailing the building. (AP Photo/seattlepi.com, Jordan Stead)

SALEM, Ore. (AP) — The campaign behind an Oregon ballot measure that would legalize marijuana for adults said Monday it will buy $2.3 million worth of television advertising in what is shaping up to be a lopsided debate.

The former head of addictions and mental health for the Oregon Health Authority urges voters to support marijuana legalization in a YouTube video that proponents say will form the basis for their first television commercial. Richard Harris says marijuana "is a pretty benign drug" compared with drugs like alcohol and heroin, and efforts to control it through the criminal justice system have failed.

Support from addiction experts like Harris can help legalization advocates rebut charges that decriminalizing the drug would fuel addiction problems. Marijuana has been legalized in Colorado and Washington state.

Other mental health experts and the law enforcement community oppose legalization, but nobody with deep pockets has stepped forward to make the case against it.

The proposal will appear on the November ballot as Measure 91. It would allow adults 21 and older to use marijuana recreationally and give the Oregon Liquor Control Commission the job of creating a regulated system to distribute the drug.

Peter Zuckerman, a spokesman for the Yes on 91 campaign, said the ad will first appear on the Internet, at the start of online videos.

Records submitted by television stations to the Federal Communications Commission indicate the ads will start airing on broadcast stations on Sept. 22 in Portland and Eugene, and a few weeks later in Medford and Bend.

The records show the campaign has reserved at least $1.3 million worth of television time out of the $2.3 million the group says it's spending. The records exclude cable television, which isn't publicly disclosed, and two Portland broadcast stations that haven't reported yet.

Oregonians rejected a marijuana legalization measure two years ago after the proponents struggled to mount even a basic campaign.