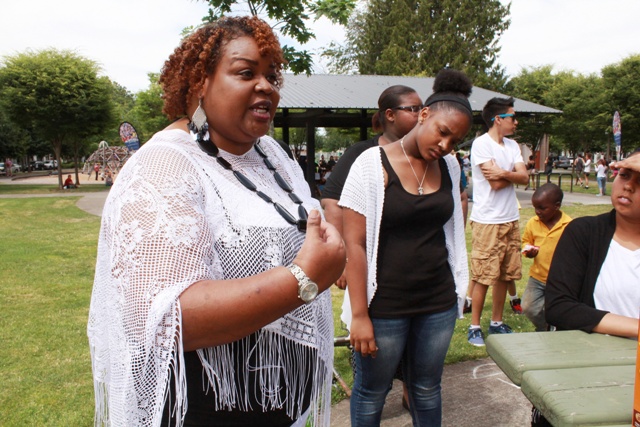 “A mother said, I don’t go out anymore, I could be talking to the perpetrator -- I don’t feel safe,’” said Portland Office Youth Violence Prevention Director Antoinette Edwards. Photo shows a community health worker at the youth-led STRYVE protest against violence earlier this summer. Photo by Helen Silvis

The citywide “Enough is Enough” campaign to reduce youth violence invites interested people to a meeting next Monday to plan out what should happen next.

The planning meeting is Monday, Aug. 18, 6 p.m. in the community room of the North Precinct, 449 NE Emerson St.

The effort, taken from a similar campaign in Detroit, Mich., focuses on persuading community members to phone in crime tips to police -- a controversial issue in situations where “snitching” can trigger even more violence.

The City of Portland Office of Youth Violence Prevention says this effort is more than that, tying together resources for community members in a way that puts the community in the forefront of developing policy and services to heal families.

“What we hope is to have folks feel safe enough to say: ‘Somebody has information that could help,’” says Youth Violence Prevention Director Antoinette Edwards. “’How can you help me in my healing?’”

Organizers kicked off the “Enough is Enough” effort at Peninsula Park in mid-July, where they signed up potential volunteers and floated the idea of a community-led movement to push back against gang violence in the Portland metro area.

“A mother said, I don’t go out anymore, I could be talking to the perpetrator -- I don’t feel safe,’” Edwards said.

“So how do we address those issues in a healing kind of a way, in a community kind of way? What Public Service Announcement could we make? What conversations are we having with young people about being bullied?

“There are a few folks that are bullying and holding this community hostage,” Edwards continues. “This is a strong village – and we’re asking the villagers to come back and – not even reclaiming because we are here. What do we do to own this?”

The “Enough is Enough” effort dovetails with an array of other projects launched this summer in response to a steady rise in “shots fired” incidents in the metro area over the past few years. While fatal shootings are not increasing, observers say they will unless community members step up and start organizing.

A telephone outreach effort funded through the Multnomah County District Attorney’s Office has helped organizers draw up a to-do list, and the public is invited to plug in and spread the message to recruit more volunteers.

• Annual Hope and Healing Activities – Participating on a Planning Committee

• Enjoining in a Witness and Victim Safety Plan Dialogue

“Enough is Enough” dovetails with a variety of similar efforts this summer, including the youth empowerment campaign by the Multnomah County Health Department Capacitation Center’s STRYVE program (Striving to Reduce Youth Violence Everywhere).

That effort combines a youth employment program with weekly support meetings for youth. STRYVE takes a different approach to youth violence prevention by treating it as a public health problem rather than a solely law-enforcement issue (see “Portland Youth Lead Effort to Heal Community and Build Peace,” The Skanner News, July 11).

Another program that has quickly come together over the past few weeks is the Community Cycling Center’s “Take Back the Streets” campaign which was galvanized by community activists Jason Washington, of Brothers Gaining Equality Through Excellence, and DeMarcus Preston, a former gang member, who approached the bike nonprofit for support.

Find out more about the cycling center project on Facebook at Take Back The Streets Bike Ride and Event.

Connect with projects of the Multnomah County Capacitation Center’s STRYVE program at www.multco.us/health.

For more information on the “Enough is Enough” Campaign call Antoinette Edwards at 503-823-3584.