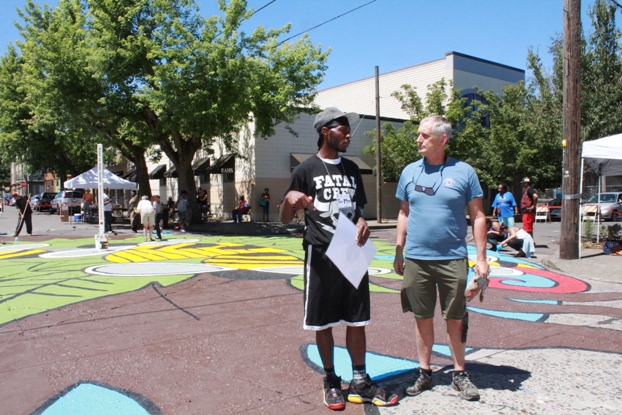 Mayor Hales has been a visible presence at many of the city's violence prevention events. Here Hales talks to artist Antoine Thomas at the site of a street painting "The Big Bang of Peace." Interns and volunteers with the county's STRYVE (Striving to reduce violence everywhere) program created the painting as part of a series of projects aiming to build community in some of the city's poorest neighborhoods.

Portland Mayor Charlie Hales says equity will be at the center of the city's work during his tenure. Hales joined New York Mayor Bill de Blasio, Philadelphia Mayor Michael Nutter and others at a Cities of Opportunity Task Force in New York City.

Sponsored by the U.S. Conference of Mayors, the task force will work to identify the best initiatives to promote equity in American cities. Hales said he already has begun the work with initiatives such as the Black Male Achievement initiative and the equity training he and senior staff took last week.  And he promises that more equity initiatives will be announced soon.

Here's the Press Release from the Mayor's office

Mayor Charlie Hales is in New York today, to take part in a nationwide Cities of Opportunity Task Force, sponsored by the U.S. Conference of Mayors.

The year-long task force will develop and share governing methodologies to empower cities to make equity a central governing principle; explore how municipal powers are best used to advance an equity agenda and how cities can work together to produce the most meaningful impact; and catalogue potential tools – such as overall budget decisions, purchasing power, regulatory controls, and procurement policies – and offer a set of best practices for using these levers of municipal government to drive greater equality and opportunity.

“The purpose of cities is to lift up residents and build a community and economy that works for everyone,” said Kevin Johnson, president of the U.S. Conference of Mayors and mayor of Sacramento. “That means having a higher minimum wage, expanding the supply of affordable housing and ensuring every child has access to Pre-K.”

De Blasio said such issues are best tackled at the city level. “We are living in a time of rising inequality and declining opportunity,” he said. “This is a threat to our fundamental values and an obstacle to the nation’s economic growth. Mayors are starting to respond to this crisis, and this task force is going to organize and focus the progressive ideas coming out of cities across the U.S., and put city issues back on the national agenda.”

The task force will develop a plan for cities to take action in developing aggressive equity agendas and implement changes. This plan will include real, practical tools and best practices – both previously executed and newly developed by the task force – which cities can use to make the most equitable decisions they can, with the powers they have, to create more equitable cities.

For Portland, equity work under way has included a new emphasis on equity in the re-write of the city’s Comprehensive Plan; the mayor’s Black Male Achievement initiative; and an unprecedented, three-day training for the mayor, members of his senior staff, and the command ranks of the Portland Police Department, on the issue of equity. More programs for ensuring equity in city services will be forthcoming over the next few months.

Participating mayors gathered Sunday in New York for a reception, following by a work meeting today at Gracie Mansion, 8:30 a.m. to noon (Eastern Time). That will be followed by a 12:30 p.m. press conference.