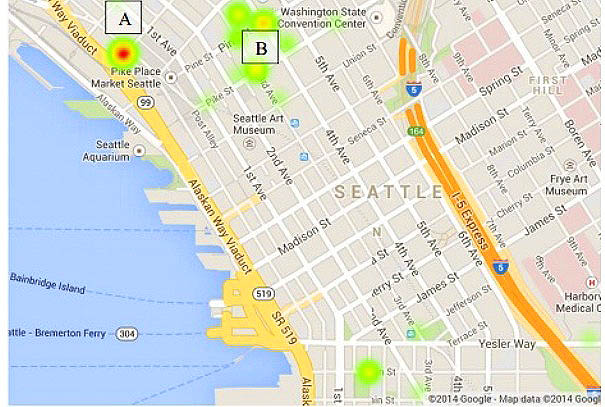 PHOTO: The report shows that the majority of citations, 31.7 percent, were issued in Victor Steinbrueck Park (A),  but cumulatively, the area in and around Westlake Park and in close proximity to the 3rd Avenue transit corridor (B) represents the largest concentration of enforcement activity with 43.9 percent of all citations being written in this area.

When Washington voters legalized marijuana, Seattle passed an ordinance that forbids using pot in public. Now a report on the first six months of the new law, shows one Seattle police officer wrote 66 of 83 tickets issued for using marijuana in public.

The report also found that homeless people who congregate in downtown Seattle's West precinct received 41 percent of the tickets. And Blacks received 37 percent, although they make up only 8 percent of Seattle's population.

Gerald Hankerson, president of Seattle King County NAACP and also president of the NAACP regional conference, said the results of the ordinance were predictable..

"While we are disheartened to hear that homeless people and people of color are disproportionately ticketed for the public use of marijuana, we are unfortunately not surprised. Ever since the war on drugs began, people of color have been the primary target--leading to appalling and indisputable disparities in our criminal justice system. What this report makes clear is that even though the laws have changed, the mentality has not."

The Seattle Times and KOMO television identified Randy Jokela as the veteran officer who single handedly wrote 80 percent of Seattle's pot tickets. Jokela has been removed from his role as a bicycle cop patrolling Seattle's downtown pending an investigation. 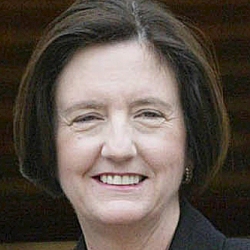 Police Chief Kathleen O’Toole posted a short statement to the Seattle Police Department Blotter, web page. Without naming Jokela, she said the officer has been assigned to administrative duty pending an investigation by the Office of Professional Accountability.

"The report is designed to provide another level of oversight for marijuana enforcement in our city and flag anomalies or outliers in enforcement," O'Toole said.  "The officer’s actions have been reported to OPA and he will not perform patrol duties during the course of the investigation."

O'Toole also offered more information that appears to suggest a personal motive for the disproportionate enforcement.

"In some instances, the officer added notes to the tickets. Some notes requested the attention of City Attorney Peter Holmes and were addressed to 'Petey Holmes.'  In another instance, the officer indicated he flipped a coin when contemplating which subject to cite.  In another note, the officer refers to Washington’s voter-enacted changes to marijuana laws as “silly.”

Holmes was a vocal advocate for legalizing marijuana and also for the ordinance that banned public use.

The report found that all but one of the tickets were issued by bicycle officers patrolling  areas around Victor Steinbrueck Park, Westlake Park, Occidental Park and downtown streets.

Only six percent of the tickets, which can demand up to $50, have been paid. Almost two-thirds are in default already with others unpaid and on track for default.

Marijuana legalization advocates argue that research shows  that African Americans and other people of color are arrested, charged and imprisoned at higher rates than whites, even though they don't use the drug at higher rates.  Now the report on the public use ordinance shows that public use tickets have disproportionately targeted Blacks.

In 2011 the Department of Justice released a report on Seattle Police Department that found constitutional violations in use of force and serious concerns about discriminatory policing.

" Of the cases that we determined to be unnecessary or excessive uses of force, over 50 percent involved minorities," the DOJ report noted.

Seattle City Council instituted reforms, but has experienced pushback over the new use of force policy. More than 100 police officers launched a lawsuit to fight the changes in May 2014.

"In order to bring justice to our community and integrity to our police department, we need to acknowledge the problem and work together to fix it," he said. "Police officers need to have an understanding of structural and institutional racism, and the role they play in continuing to criminalize the black community. There needs to be an open line of communication with community members, and we all need to come together to find solutions that ensure that everyone is treated equally under the eyes of the law."