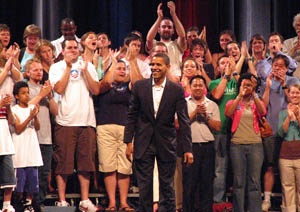 Harking back to the inspiration he drew from the civil rights movement, Democratic presidential candidate Barack Obama told an estimated 3,500 cheering supporters Friday that "there is nothing more noble" than working toward a government that reflects America's values and ideals.
Obama, introduced to the strains of Aretha Franklin's "Think (Freedom)," repeated his standard campaign themes, calling for health care insurance for all and reform of "an education system that, despite the slogans, is leaving millions of children behind."
He also called for a national energy policy that focuses on environmentally friendly technologies, saying, "If we can send somebody to the moon, we can sure as heck figure out how to make a green economy."
Above all, Obama called for an end to the war in Iraq. The Illinois senator noted that he opposed the war from the beginning, and said it "never should have been authorized."
He also called for the United States to work with other nations on issues such as climate change, nuclear proliferation and global poverty.
"It is time to match the might of our military with the strength of our diplomacy," he said.
Obama conceded that "some of these things are going to cost money, and we can't do a lot of these things if we keep spending $275 million a day on a war that is not making us safer."
But he said the problems are not insurmountable, and recalled the struggles of the civil rights movement as an example.
"I thought there was nothing more noble than the idea of young people wanting to rebuild America from the grassroots," he said.
Obama's health care reform plan, which he announced earlier this week and which would largely be financed by tax increases on the wealthy, drew a jab before his speech from state Republican Party Chairman Luke Esser.
"Barack Obama used his first big policy speech to call for a massive tax increase and a brand new tax on small businesses," Esser said. "It's nothing but the same old tax-and-spend politics we've seen from liberal presidential candidates for decades."
After the rally, the Illinois senator headed to several fund-raising receptions.
Campaign spokesmen declined to say how much money they hoped to raise from the rally and receptions. Tickets to the rally cost $25, and those to the general reception at the Westin Hotel cost $500, or $2,300 to the "sponsors" reception.
Among the receptions' hosts were Democratic U.S. Rep. Adam Smith and former Seattle Mayor Norm Rice, the two highest-profile Washington state politicians who have come out for Obama so far.
Other hosts were RealNetworks Inc. CEO Rob Glaser and Lloyd Frink, president of the online house-value company Zillow.com.
So far, leading political figures in the state have largely avoided taking sides.
"Washington looks a lot like the rest of the country," said Seattle-area Democratic consultant Christian Sinderman, who is not working with any of the presidential campaigns. "Edwards, Clinton and Obama are the best known and have the most enthusiastic support. And there's some interest in the next tier of candidates.
"But Washington voters, even the most partisan Washington voters, tend to be fairly open-minded and a little bit independent of the national trends."
Obama's last visit to Washington state was on Oct. 26, when he was still just a potential candidate and appeared at a campaign rally in the Seattle suburb of Bellevue for U.S. Sen. Maria Cantwell, who won reelection in November, and Darcy Burner, a former Microsoft program manager who lost her bid to oust Republican Rep. Dave Reichert.