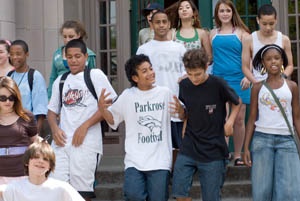 More than 50 years of school desegregation policy could be torn down with the rap of a gavel if the Supreme Court rules against Seattle's voluntary integration "Open Choice" program, which used race as a determination in its high school transfer policy.
The high court is expected to decide in the next few weeks if two cases of voluntary integration are simply helping increase student diversity or disguising the illegal practice of setting racial quotas.
The two cases, Parents in Community Schools v Seattle School District and Meredith v Jefferson County (Kentucky) Public Schools challenge the constitutionality of race-based admissions policies in America's public schools.
In both cases, parents and representatives of White students have sued school districts after their children were denied admission to the school of their choice because of their race.
In Seattle, the district attorney has said race was one of many factors taken into account when a student transferred to a high school not in their immediate neighborhood. The intended outcome was to create a better racial balance in the Seattle district's high schools, but race was only used as a last resort when assigning students to many of the district's popular high schools.
The race-based admissions criteria ended in 2002, although its opponents contend the program could be reinstated at any time.
In the Kentucky case, race was used to ensure schools were between no15 and 50 percent Black. The mother in the case, Crystal Meredith, contends her then-elementary school-aged White son should not have been denied admission to a school close to his home because of the color of his skin.
While the Court decided favorably in the University of Michigan Law School affirmative action case three years ago, the court now lacks its swing voter, former Justice Sandra Day O'Connor. Her replacement, Justice Samuel Alito, is far more conservative and many supporters of desegregation fear the court will not favor racial admission guidelines.
Marc Morial, president of the National Urban League, has said the court's ruling could lead "to a mass re-segregation" and, in an amicus brief filed last October by the Urban League, Morial warned the justices that it would be a "fallacy to suggest that by not considering race at all – i.e. by ignoring de facto neighborhood segregation – the Seattle School District would somehow be acting in a 'race-neutral' fashion when a return to a school system that does not take race into account would mean that the schools would be distinguished solely by race."
Morial pointed out in a recent editorial, that school districts that have implemented "race-neutral" school assignment plans after having used race as a factor have seen reversals in their integration efforts.

Portland Public Schools went "race neutral" years ago, and Matt Shelby, a spokesman for PPS, says the policy puts the power into parents' hands.
"There's no overt attempt (to establish racial quotas)," Shelby said. "Ultimately it's the family's choice."
This means the court's decision will have little effect on racial balance in Portland schools. Under current transfer policy guidelines, PPS students have the option of attending any school in the district, although most – not including students in the Jefferson cluster — attend their neighborhood school.
Race doesn't factor into the transfer policies at nearby districts either. Parkrose, David
In Portland, the district's open enrollment policy has both positive and negative effects on racial balance across the district. District representatives say many students of color transfer out of their neighborhood high school – typically in the Jefferson, Roosevelt and Madison clusters — and increase the percent of minorities in other district high schools.
Regardless, Portland's high schools remain fairly segregated.
In the Jefferson cluster, only 27 percent of the neighborhood's 1,751 eligible students attend the high school and nearly 70 percent of the students at Jefferson are Black. The rest of Jefferson's student population is 13 percent White, 3 percent Asian and 13 percent Hispanic.
Across the river, at one of the state's best-performing high schools, Lincoln High, diversity is reversed, with 79 percent White, 6 percent Black, 8 percent Asian and 6 percent Hispanic students.
Likewise, the schools are divided by academic progress. Last year at Jefferson, only 15 percent of the school's 10th grade students met or exceeded state math benchmarks. But, at Lincoln, 78 percent of 10th-graders met that same benchmark. And, with 80 percent of neighborhood students choosing to attend Lincoln, there aren't a lot of open slots for people wanting to transfer in.
The Wilson cluster is the least diverse in the district with a student population that is 83 percent White, 5 percent Black, 6 percent Hispanic and 6 percent Asian – but it has the highest number of neighborhood students (85 percent) attending the high school.

Portland Public Schools used to use race as a factor for school transfers, but the way in which this desegregation policy was carried out upset many in Portland's tight-knit African American community.
According to Caroline Leonard, director of compliance for Portland Public and a longtime district employee, said the district's past desegregation policy had many unpleasant consequences.
During the 1970s, after Portland developed a voluntary desegregation busing system – as opposed to the involuntary federal guidelines — middle schools were removed from North and inner Northeast Portland. The structure of the early childhood education became "accelerated" and many Black students were assigned to schools far away from their own neighborhoods.
Saying the 1970s system, called the Blanchard Plan, was anything but voluntary for Portland's African Americans, Ron Herndon helped lead the fight for change. Herndon, a leader of the Black United Front, wanted to see Black students go to school in their own neighborhoods.
"They sent Black children to as many different schools as possible," Herndon said.
For example, students who would have normally gone to the King Elementary School were being bused across town to more than 40 different schools.
"If you lived across the street from King, you couldn't go there," said Leonard, an African American whose children and grandchildren have attended Portland schools.
As a consequence, brothers and sisters were attending different schools from one end of town to the other, making it nearly impossible for parents to get involved in their children's education. The transportation costs also were expensive. Herndon said some children were even taking cabs to get to school, costing the district thousands, and Black students spent hours riding buses. In many cases, elementary-aged children would leave school before sunrise and get home after sunset.
"The execution of the plan was racist," Herndon said. "All in the name of integration …"
In 1980, after Herndon and others staged protests at school board meetings, the district implemented a much fairer desegregation policy. Tubman Middle School was formed, and African American children could once again attend schools in their own neighborhoods.
The Seattle policy that sparked the Supreme Court's involvement differed from Portland's failed desegregation program in that race was only used as a factor at the high schools and only when it came to students who were looking to transfer into a school outside their neighborhood.
Today, no overt racial quotas are used in Portland, but Shelby said one factor could affect how a student's transfer request is handled – economic status. Roughly half of the district's students qualify for the federal Free or Reduced Lunch Program. If a student qualifies for the program, it gives them an advantage when applying for a transfer.

With the U.S. Supreme Court's decision expected in the next few weeks, many experts have come out to highlight this country's continued problem with segregation.
John Brittain, chief counsel and senior deputy director at the Lawyers' Committee for Civil Rights Under Law told media at the Center for American Progress in Washington D.C. two weeks ago that the United States has a long way to go.
"We're more segregated today than we were in 1954," Brittain said. "Especially in urban areas."
The Bush administration has taken the side of the White students' parents.
According to The Associated Press, in a brief filed with the Supreme Court, the Seattle School District defended its policy.
"The plan has prevented the re-segregation that inevitably would result from the community's segregated housing patterns," the district stated.