Portland Protest Calls On Obama to Act on Immigration Reform 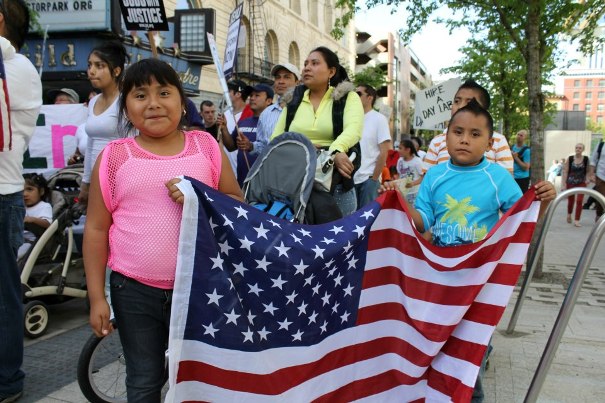 PHOTO: Children held an American flag at a May Day 2013 demonstration where immigration reform was highlighted. Helen Silvis

The Oregon AFL-CIO issued this press release Wednesday after a demonstration outside the US Citizenship and Immigration Field Office.

(Portland, Oregon) Standing outside of the United States Citizenship and Immigration Services Field Office in Northwest Portland, immigrants, legal experts, and union members called on President Obama to take executive action to address growing concerns about our country’s immigration system, and to help a growing number of refugee children from Central America who are fleeing violence and terror.

“Under U.S. laws and international human rights agreements, children fleeing violence and human trafficking in Central America have a right to seek asylum in our country,” ACLU of Oregon executive director David Fidanque said.  “Once those children reach the U.S., they also have a right to have their case heard in a fair process consistent with our Constitution.  No child should be deported without a fair hearing before an immigration judge – and that means the child should have an attorney to represent them in that hearing.”

While efforts to connect these children with their families have stepped up, there are still concerns.

“Refugees – especially children – who are fleeing countries where laws are not enforced and rights are not upheld, don’t know to advocate for themselves,” explained Center for Intercultural Organizing Executive Director Kayse Jama.   “We must have the resources in place to help these kids – and we must change our views, as a country, of the immigrants and refugees who are coming here because they seek the same opportunities that I did when I came here, and that you families did when they came to this country.  We are a country of immigrants.  It’s time to remember that, and to show compassion to our future neighbors.”

The calls for action were twofold: both immediate action to ensure refugee children are not being deported, and also fulfilling promises made to reform the immigration system for all those looking for a better life in our country.

“I want the President to hear this,” said Oregon AFL-CIO President Tom Chamberlain: “We supported him; we saw the actions he took to help workers; we see what he’s doing to raise wages; but it’s not enough until we help all working people in this country; it's not enough while 11 million people are working in the shadows and children are overwhelming a system with no means to support them.  He must take this on.”