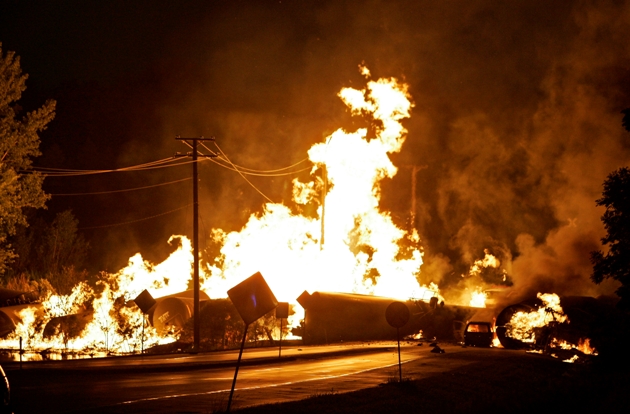 PHOTO: In this June 19, 2009 file photo, a car at right is seen engulfed in flames from rail cars loaded with ethanol that derailed in Rockford, Ill. A Rockford woman died as she tried to flee the derailment. Environmental groups asked the U.S. Department of Transportation to immediately ban shipments of volatile crude oil in older railroad tank cars, citing oil train wrecks and explosions and the agency's own findings that accidents pose an imminent hazard. The petition filed Tuesday, July 15, 2014, by the Sierra Club and ForestEthics seeks an emergency order within 30 days to prohibit crude oil from the Bakken region of the Northern Plains and elsewhere from being carried in the older tank cars, known as DOT-111s. (AP Photo/Rockford Register Star, Scott Morgan, File)

The petition filed Tuesday by the Sierra Club and ForestEthics seeks an emergency order within 30 days to prohibit crude oil from the Bakken region of the Northern Plains and elsewhere from being carried in the older tank cars, known as DOT-111s.

Accident investigators have reported that the cars rupture or puncture during wrecks, even at slow speeds.

Shippers in North America use about 66,000 of the so-called legacy tank cars to haul flammable liquids, including about 23,000 that carry crude, according to industry representatives.

The Obama administration has said it will propose a new rule this month governing tank cars that could include retrofits of older cars and tougher standards for new ones.

However, that "will take too long to address the imminent hazard posed by use of dangerous DOT-111 tank cars to ship crude oil," according to the petition filed by the law firm Earthjustice on behalf of the two environmental groups.

It could take a year before a rule is finalized. In the meantime, the shipments are putting small towns and major cities along the rail lines at risk, the petition said.

Transportation Department spokesman Ryan Daniels said the agency cannot comment on whether an outright ban is under consideration, because a formal rule-making process for the older tank cars already is underway.

Since 2008, derailments of oil trains in the U.S. and Canada have seen the 70,000-gallon tank cars break open and ignite on multiple occasions, resulting in huge fireballs. A train carrying North Dakota crude in DOT-111s crashed in a Quebec town last summer, killing 47 people.

"We need to get them off the tracks as soon as possible. I'd like to see a moratorium," said Ben Stuckart, Spokane City Council president. As many as 17 mile-long oil trains pass through the county that includes Spokane in a typical week.

In New York, Albany County Executive Dan McCoy said he wants to see older tank cars replaced with safer models. "They really should ban them across the board, and go with the newer models," he said.

Problems with the older tank cars have been cited by safety advocates since the mid-1990s. In April, outgoing National Transportation Safety Board Chairman Deborah Hersman urged quicker action on pending tank car rules. She warned that a "higher body count" could result from further delay.

Transportation Secretary Anthony Foxx in May advised companies to avoid using the older cars to carry the volatile oil from the Bakken region of North Dakota, Montana and parts of Canada. But the step was voluntary, and the older tank cars continue to be used.

The vast majority of those cars deliver their shipments safely, said Tom Simpson, president of the Railway Supply Institute, which represents the companies that make, own and use the tank cars.

"They are not rolling time bombs," Simpson said.

Since 2011, more than 10,000 tank cars with more protective shells and other improved safety features have been put into service under a voluntary industry standard. Simpson said further upgrades could be made over the next decade, and older cars found to be unfit for service eventually will be retired by their owners.

Regulators in Canada have moved more aggressively on the issue than their U.S. counterparts. In April, Transport Canada ordered railroads to phase out older cars within three years.