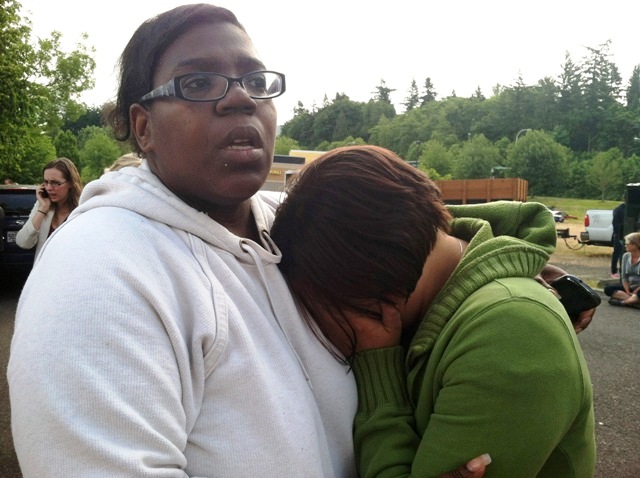 Amber Booth collapses on friend Chenelle Jones at the Fred Meyer store in Wood Village, Ore., after a shooting at Reynolds High School last June. The teenaged shooter was believed to have mental health problems. The landmark study comissioned by the Seattle City Council found that, contrary to popular belief, most shootings are not linked to psychological problems. Helen Silvis photo

The most likely cause of gun violence is not mental instability or drug abuse but rather a history of firearm-related hospitalization, says a groundbreaking study commissioned by the Seattle City Council and released Monday morning.

Fred Rivara, M.D., a renowned medical researcher at the University of Washington's Harborview Injury Prevention and Research Center, headed the study that specifically looked at gunshot victims and perpetrators in the city and around the state.

The people most likely to shoot others are people who have been hospitalized for gunshot wounds themselves, the study says – and their rate of future injuries, criminality and death are higher than that of individuals with mental health problems.

"The evidence shows gun violence begets gun violence. If you are harmed by a gun, you are much more likely to be harmed again or to harm others," said Council President Tim Burgess this week.

Burgess told reporters that the goal is to “establish a baseline” of common knowledge about the key aspects of what drives gun violence, so lawmakers can begin looking at policies to address it.

“And I think as Dr. Rivara said, the impact of being injured by a gun is far greater than we would have predicted,” Burgess said.

The Centers for Disease Control and Prevention reports more than 30,000 people are killed by guns on average per year in the United States. A study published by the journal Pediatrics in January of 2014 found that 20 children and adolescents are hospitalized each day for firearm injuries nationwide, for a total of 7,391 people under age 20 in 2009, the most recent year the data was available.

Councilmembers specifically tasked researchers to analyze connections between hospitalizations due to gun violence, substance abuse, mental health diagnoses, arrest records and deaths. They looked at hospital records from 2006-2007, then wove in data from the five years before that period and the five years after.

Seattle’s effort, which cost $150,000, is a first for local municipalities. Since the 1990s, the federal Centers for Disease Control and Prevention has been hamstrung in conducting research into gun violence by Republicans in Congress, backed by the National Rifle Association.

Conservatives most recently doubled down against funding studies on the causes of such violence after the Sandy Hook massacre in 2012, in which a mentally disturbed young man gunned down 20 little children and six adults.

It was the bloody slayings at Sandy Hook that prompted members of the Seattle City Council to think about funding their own study without federal dollars. Last June they became the first municipal government to take that plunge, and the surprising findings are already prompting a short list of policy options, according to Burgess.

In an interview Monday with Marcie Sillman at KUOW, Rivara said early childhood education and counseling interventions for victims of gun violence are the best policy tools to minimize shootings.

In the radio interview Rivara described a 30-minute “intervention” that Harborview staff conducts with hospitalized victims of drug and alcohol abuse before they are released that has been shown to reduce their rate of substance abuse by about 50 percent – similar interventions might help prevent shootings, he suggests.

Rivara said early childhood education in particular has been shown by many studies to reduce violence in children’s lives.

“We think that it is by affecting their early trajectory – instead of a trajectory where they go down a path of school failure and drop out, association with other dropouts and delinquent kids -- you have a trajectory instead that is school success.

"What we are asking to do is to help people and not infringe on an individual's second amendment rights,” said Councilmember Bruce Harrell, chair of the Council's Public Safety, Civil Rights and Technology Committee. “These are common sense programs and laws we can enact to keep guns out of the hands of people at the greatest risk of causing further harm."

The study concluded that:

$1n  Individuals hospitalized with an injury and previously arrested for firearms or violence were 13 times more likely to be arrested again within the next 5 years.

$1n  Individuals hospitalized with a firearm injury were 11 times more likely to die from gun violence within the next 5 years than people admitted for non-injury reasons.

$1n  Individuals hospitalized with an injury and with a prior arrest for a gun-related or violent crime were 43 times more likely to be murdered within the next 5 years after being discharged from the hospital compared to people without such a history.