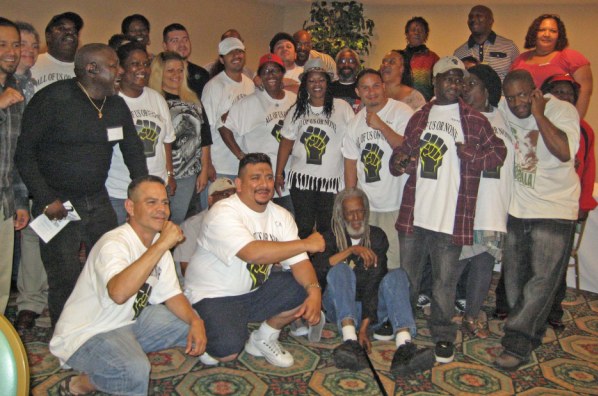 PHOTO: The national "Ban the Box" campaign was started in 2003 by All of Us or None, a grassroots civil rights organizing initiative of formerly-incarcerated people and their families. Pictured here are members of the group at a gathering in Los Angeles.

Portland activists from the Urban League, Oregon Action and the AFL-CIO are building a ballot measure campaign to eliminate job and housing discrimination against people with arrest and conviction histories by “banning the box.”

Activists say more than 32,000 people in Oregon are currently incarcerated or on community supervision and face barriers to housing and jobs.

Statistically, almost 11 percent of that group is black despite the fact that the state’s overall black population is just 2 percent.

"Our criminal justice system convicts and incarcerates African Americans and other people of color in numbers that far exceed our percentage in the state,” says Urban League of Portland Executive Director Michael Alexander.

“As long as this inequity is compounded by shutting people with criminal histories out of jobs and housing, their families, lives and communities will all be severely impacted.

“We can either enshrine discrimination, poverty and increase the likelihood that people reoffend, or we can take tangible measures to give people a fair chance to earn, be good neighbors and contribute to our economy and community," Alexander says.

The City of Seattle “banned the box” last year, limiting the use of criminal history in hiring for anyone who works at least 50 percent of the time within city limits.

“Employers cannot advertise or implement any policy that categorically excludes individuals based on their conviction or arrest record.  This means job advertisements that specify “no felonies” or “clean criminal history required” will not comply,” the law states.

“Employers can inquire about arrests, but are prevented from taking a negative action based solely on an arrest, as it is not proof of unlawful conduct.”

The Seattle law provides steps in the employment process in which interviewers are legitimately allowed to question applicants about their legal history, and specifies the limitations on employers’ access to the information and how that information is used based on new federal Equal Employment Opportunity Commission guidelines.

The Portland organizing effort received a big boost this week as the City Office of Equity and Human Rights Director Dante James announced the box has been removed from City job applications.

“Questions about criminal background, if relevant to the position, would be asked later in the hiring process,” he wrote.

“City Human Resources leaders, after attending the GRE Conference, took to heart the chilling outcome that these types of questions can have on former offenders during the job application process. OEHR applauds the decision and hopes the change will attract a more diverse pool of applicants to City jobs.

The Portland movement is part of the national “Ban the Box” campaign, where the goal is to eliminate the box on job and housing applications that requires applicants to mark “yes” if they have ever been arrested or convicted.

Most of the time ticking that box lands unemployed and houseless people on the street.

The groups host an open forum at 6 p.m. on Tuesday, July 15 at the Highland Christian Center, Fellowship Hall, 7600 NE Glisan St. to give people a chance to ask questions and tell their stories of being denied jobs and housing over the issue.

The Fair Chance for All Coalition now includes more than 20 organizations.

Organizers say eliminating “the box” allows employers and landlords to judge applicants on their skills and qualifications by making an individual assessment – instead of a blanket ban.  Ban the Box legislation has been passed on over 50 other cities and counties, and 10 states.

For more information go to www.ulpdx.org.