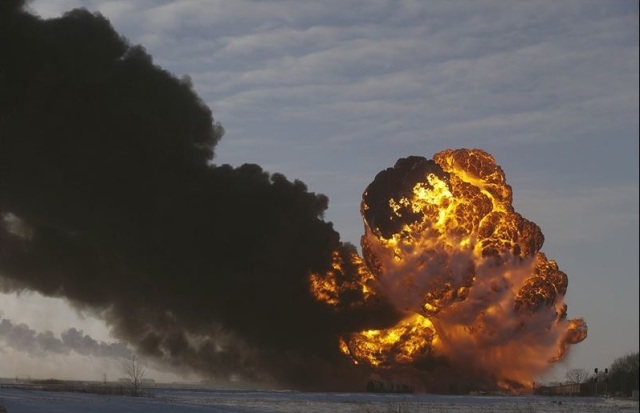 A fireball rises at the site of a derailment in Casselton, N.D. Experts said no one expected the explosive nature of the light, sweet crude from the Bakken oil field. Oregon State Police have finally disclosed such shipments in Oregon, thanks to Washington State's open records. ASSOCIATED PRESS

PORTLAND, Ore. (AP) — When Oregon officials at last released oil train routing information after a month-long public records battle, they still decided to redact some information. But officials in neighboringWashington state had no such qualms.

The Oregonian reports that Oregon officials made at least four redactions when the information was available in Washington records, including the source of the oil and who shipped it.

The records, which show how much crude oil from the Northern Rockies was carried by train car through Oregon, were released Thursday. Media outlets requested them one month ago, but Oregon public officials said the material was protected by federal law.

The records show BNSF Railway moved three oil trains through Multnomah County, which includes Portland, in the first and second week of June, and those cars continued north to Columbia County. The un-redacted W shington records include Oregon information because the trains pass through Washington state.

The Washington records show that the oil was shipped by Phillips 66 Co. from Berthold, North Dakota, to the Columbia Pacific Bio-Refinery in Clatskanie, Ore.

The records were provided to the U.S. Department of Transportation after the agency issued an emergency order requiring railroads to notify state officials about the volume, frequency and county-by-county routes of trains carrying 1 million or more gallons of crude oil from the Bakken region of North Dakota, Montana and parts of Canada.

BNSF were obligated to make the disclosures because they move more than 1 million gallons of Bakken oil per train through parts of the state.

Union Pacific carries oil from regions other than Bakken, exempting it from disclosure — though Oregon's two U.S. senators say all oil carriers should make similar disclosures. They also pressed for the 1 million-gallon minimum threshold to be lowered to include smaller shipments.

The records were distributed to the public in late June in most states, but in Oregon, the Oregon State Police denied initial requests from media outlets including The Associated Press and the Oregonian, then billed the outlets for the records.

The state police said in a letter on Thursday that they changed their minds and would refund the money.