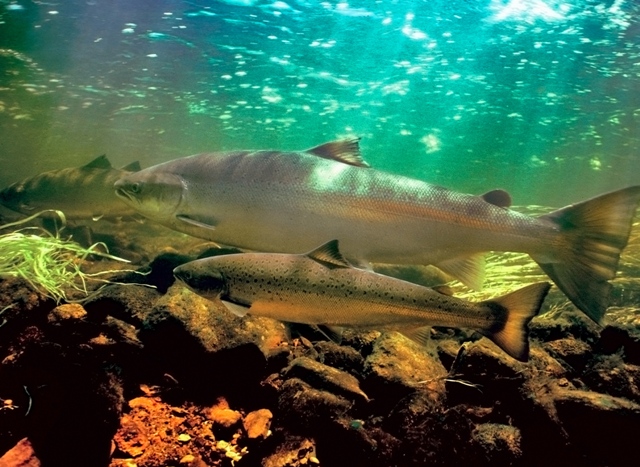 VANTAGE, Wash. (AP) — Anglers have good reason to be booking trips with fishing guides or getting their own gear rigged and vacations scheduled for fishing the Columbia River from now into October.

The second-largest sockeye run on record is sprinting through the Columbia.

Washington fish managers on Tuesday announced a forecast of 425,000 sockeye into the Columbia, a number second only to the 521,000 counted in 2012.

Already this year, more than 340,000 sockeye have entered the Columbia past Bonneville Dam, doubling last year's entire run of 186,100.

A decision on whether a sockeye fishery will be opened in Lake Wenatchee won't be made until late July or perhaps early August. During the record year in 2012, a Lake Wenatchee season was opened on Aug. 4.

Anglers fishing the upper Columbia — the river upstream from Priest Rapids Dam — can catch four sockeye a day and up to four chinook, only two of which can be adults larger than 24 inches.

Anglers looking to put in more hours for a fish with up to 10 times the fight, not to mention that much more meat, also are riding high this season with a forecast for a solid run of 67,500 summer chinook.

The fish already are running through the Columbia upstream to the Brewster area. Fish in the lower Columbia were mainly 15-22 pounds with some around 30 pounds, said Joe Hymer, Washington Department of Fish and Wildlife salmon specialist in Vancouver.

So far in the fishery, creel checks have indicated anglers are catching 60 percent unmarked fish and 40 percent hatchery fin-clipped fish.

"We'd predicted the opposite, that the catch would be 60 percent marked fish," Hymer said.

An adult chinook is eligible to be caught and kept in the upper Columbia only if its adipose fin has been clipped before release from the hatchery.

"This year's summer chinook indicates the benefits of habitat improvements upstream and supplementation that has been increasing in recent years," said Hymer. "From the 1980s through 2000, the total returns ranged from 9,000 to 23,000 fish.

Over the years, salmon have been released at more sites in the upper Columbia drainage to increase returns. The sites include Chelan Falls, Turtle Rock, Wells Hatchery, Similkameen River, Carlton on the Methow River, Dryden Pond on the Wenatchee and Entiat River.

The first young summer chinook raised at the new Chief Joseph Fish Hatchery were released last month. Those fish should start showing up as 4-year-old adults in 2017.

The crack found in Wanapum Dam this winter, forcing a severe drawdown of the reservoir upstream past Vantage, has not impeded migration of fish up or downstream, state officials say.

Opening day creel checks indicated salmon were well distributed through the upper Columbia on Tuesday. Anglers were catching them from upstream of Ringold all the way upstream to Wells Dam.

The Hanford Reach upstream from the Tri-Cities may be the newest sockeye hot spot as a few anglers have learned the salmon migration routes. Anglers anchor in shallow water close to shore and intercept the fish as they move upstream.

"The catch of chinook below Wanapum was not as good as expected, but a lot of sockeye were caught there," said Travis Matland, WDFW biologist out of Wenatchee. He noted that catch rates can change dramatically from day to day and site to site during the salmon migration.

"Near the mouth of the Wenatchee, there were a number of anglers who did well on chinook and a few sockeye Tuesday and also above Rocky Reach Dam and where the Chelan River comes into the Columbia. At Wells tailrace, there wasn't a lot of pressure — just a few boats, but sockeye were being caught. One boat had four limits."

The summer chinook and sockeye runs are just part of the story. A record-shattering run of fall chinook also is forecast for the Columbia.