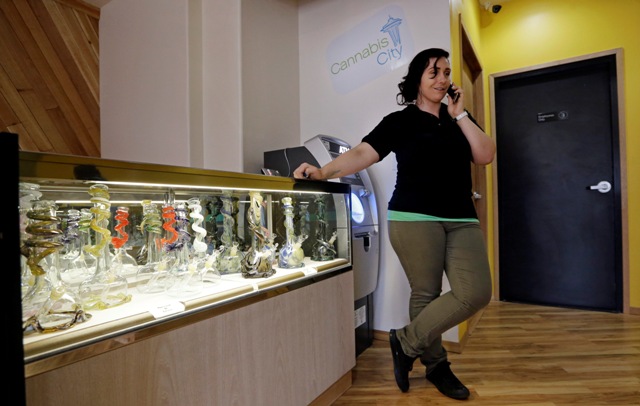 Cannabis City manager Amber McGowan takes the marijuana shop's first call, from a potential customer, days before the grand opening Wednesday, July 2, 2014, in Seattle. The store expects to begin selling pot Tuesday, July 8, the first day that recreational marijuana can legally be sold in Washington state and is expected to be the first licensed retailer in Seattle. (AP Photo/Elaine Thompson)

"We're pretty stoked," said John Evich, an investor in Bellingham's Top Shelf Cannabis, in a 2:30 a.m. Pacific time interview with The Associated Press. "We haven't had any sleep in a long time, but we're excited for the next step."

Randy Simmons, the state Liquor Control Board's project manager for legal marijuana, said Sunday night that the first two dozen stores were being notified so early to give them an extra few hours to get cannabis on their shelves before they are allowed to open their doors at 8 a.m. Tuesday — an opening that's expected to be accompanied by high prices, shortages and celebration.

The issuance of the retail licenses marked a major step that's been 20 months in the making. Washington and Colorado stunned much of the world by voting in November 2012 to legalize marijuana for adults over 21, and to create state-licensed systems for growing, selling and taxing the pot.

Sales began in Colorado on Jan. 1.

It remained unclear how many of the pot-shops being licensed in Washington planned to open on Tuesday. Officials eventually expect to have more than 300 recreational pot shops across the state.

At Cannabis City, which will be the first and, for now, only recreational marijuana shop in Seattle, owner James Lathrop worked into the night Sunday placing no-parking signs in front of his building, hoisting a grand-opening banner and hanging artwork before he turned his attention to his email — and the official notification that he was a licensed marijuana dealer.

"I've had a long day. It really hasn't sunk in yet," he said early Monday.

He planned to hold off on opening his store until noon on Tuesday.

With the emailed notifications in hand, the shops immediately worked to place their orders with some of thestate's first licensed growers. As soon as the orders were received, via state-approved software for tracking the bar-coded pot, the growers could place the product in a required 24-hour "quarantine" before shipping it early Tuesday morning.

The final days before sales have been frenetic for growers and retailers alike. Lathrop and his team hired an events company to provide crowd control, arranged for a food truck and free water for those who might spend hours waiting outside, and rented a portable toilet to keep his customers from burdening nearby businesses with requests to use the restrooms.

At Nine Point Growth Industries, a marijuana grower in Bremerton, owner Gregory Stewart said he and his director celebrated after they worked through some glitches in the pot-tracking software early Monday and officially learned they'd be able to transport their weed 24 hours later, at 2:22 a.m. Tuesday.

"It's the middle of the night and we're standing here doing high-fives and our version of a happy dance," he said. "It's huge for us."

Pot prices were expected to reach $25 a gram or higher on the first day of sales — twice what people pay in the state's unregulated medical marijuana dispensaries. That was largely due to the short supply of legally produced pot in the state. Although more than 2,600 people applied to become licensed growers, fewer than 100 have been approved — and only about a dozen were ready to harvest by early this month.

Nevertheless, Evich said his shop in Bellingham wanted to thank the state's residents for voting for the law by offering $10 grams of one cannabis strain to the first 50 or 100 customers. The other strains would be priced between $12 and $25, he said.

The store will be open at 8 a.m. Tuesday, he said, but work remained: trimming the bathroom door, cleaning the floors, wiping dust off the walls and, of course, stocking the shelves.

In Seattle, among those who planned to buy some of the first pot at Cannabis City was Alison Holcomb, the lawyer who drafted Washington's law. She said it was a good opportunity to remind people of the big-picture arguments for ending nearly a century of prohibition and displacing the black market, including keeping nonviolent, adult marijuana users out of jail; redirecting profits away from criminal groups; and ending racial disparities in who gets busted.

"No one thought legalization could happen in our lifetime," she said. "I think this is going to be a little overwhelming for me."