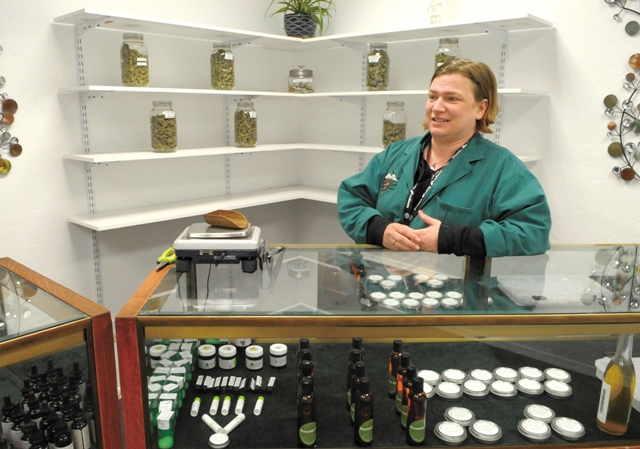 Going Green Compassion Center co-owner Sarah Whiteley is photographed at the medical marijuana dispensary's new Albany, Ore., location on June 4, 2014. About a dozen medical pot shops are in limbo in Oregon, holding onto state licenses that say they can operate but facing local ordinances saying they can't. The state's dispensary law was intended to move dispensaries onto a firmer legal footing, but the Legislature in early March passed a bill allowing communities to bar them locally. The law took effect just days after the state began accepting applications from dispensaries seeking approval for their operations. (AP Photo/Albany Democrat-Herald, David Patton)

SEATTLE (AP) — Pete O'Neil saw Washington's legalization of marijuana in 2012 as a path to retirement, or at least to his kids' college tuition.

He's paid tens of thousands of dollars in rent on possible locations for a pot-shop chain, hired lawyers and picked out flooring. But now the nation's second legal recreational marijuana industry is about to start without him.

O'Neil struck out in Washington's lottery for coveted pot-shop licenses. He has unsuccessfully tried to buy companies that scored a lucky number. In frustration, he's turning what would have been his Seattle retail store into a medical marijuana dispensary.

"Our company is bleeding money, and I haven't sold a single joint," O'Neil says.

As Washington plows toward the legalization of pot, it's finding that getting the cannabis market off the ground has been even tougher than anyone imagined.

Among the frustrated are growers who have been waiting months for permission to start raising their bar-coded plants; advocates who wish more public health messaging had been done by now; and would-be pot vendors like O'Neil who say bad luck, minor oversights on their applications, or errors by state officials have torpedoed otherwise promising efforts.

Washington's Liquor Control Board expects to issue the first 15 to 20 marijuana retail licenses July 7, months later than first expected, but it's not clear how many of those shops are ready to open. Board staff said last week only one shop in Seattle is prepared for its final inspection.

Randy Simmons, the board's legal pot project manager, predicts a "bumpy road," with an initial shortage of stores and marijuana alike. Many businesses that got lucky in the pot-shop lottery in April have since been disqualified, such as by being too close to schools or playgrounds. Others haven't finished building or made deals to buy pot from licensed growers.

"This is a gold-rush mentality and everybody wants to get rich," Simmons says. "Some people just don't have an idea what they're doing — no clue at all. It slows down the process."

Pot shortages are certain. More than 2,600 people applied last fall to grow marijuana, but those applications are being reviewed glacially by the board's 18 swamped licensing investigators. Only about 80 growers have been approved, and some won't harvest by early July. Hundreds of applicants haven't even been assigned an investigator.

Prices could run more than $25 a gram for the heavily taxed pot — about twice what the state's unregulated medical dispensaries charge — until more growers are licensed, Simmons says.

There will be no edibles available. People who want to make brownies, cookies or other pot-infused treats must have their kitchens inspected by the state. Of the two tested so far, one failed — it didn't even have a hand-washing sink. The report on the other hasn't been completed.

The board has capped the number of retail stores statewide at 334, but dozens of jurisdictions have banned them, prompting lawsuits in two cities.

Colorado, which also voted in 2012 to legalize pot for adults over 21, is bringing in millions of dollars a month while Washington struggles to build its industry. Unlike Washington, Colorado already had a regulated medical system, making for a smoother transition when it allowed dispensaries to begin selling for recreational use in January. Washington has also done more work developing marijuana safety standards.

Many industry hopefuls have found Washington's delays maddening. Douglas Taylor spent $230,000 on land for his planned outdoor grow. The payments run $1,600 a month, and he says the board hasn't even started reviewing his application. Meanwhile, he has missed the outdoor growing season — a revenue loss of about $500,000, he estimates.

Ed Rhinehart, 58, a retired businessman, counted on being licensed for an outdoor grow by April. He hired four workers, spent $22,000 on a required fence and dropped $10,000 on surveillance cameras. April 15, he laid everybody off. After months of back-and-forth with the board, Rhinehart expects to get his license soon. But he too will have missed the outdoor season.

Many would-be retailers allege missteps by the board. For example, they point to mixed signals about whether officials would allow multiple people to apply for retail licenses using the same address. The board did, and some groups formed numerous corporations to apply myriad times — significantly boosting their lottery odds and prompting complaints they gamed the system.

Others say they were kicked out of the lottery because inaccurate measurements placed them within 1,000 feet of a protected area, because board staff misread their criminal history, or because they supposedly failed to turn in complete applications.

Simmons says anyone who believes mistakes were made in their removal from the lottery should appeal, and 127 people have done so. But it's unclear what the state will do for them if they succeed.

Despite the bumps, others credit the board for its handling of a monumental task. Bob Leeds, who retired from banking and social-services work, is a partner at Sea of Green Farms, a licensed pot-grower in Seattle. His team just finished harvesting 40 pounds — some of the first marijuana that will be legally sold inWashington.