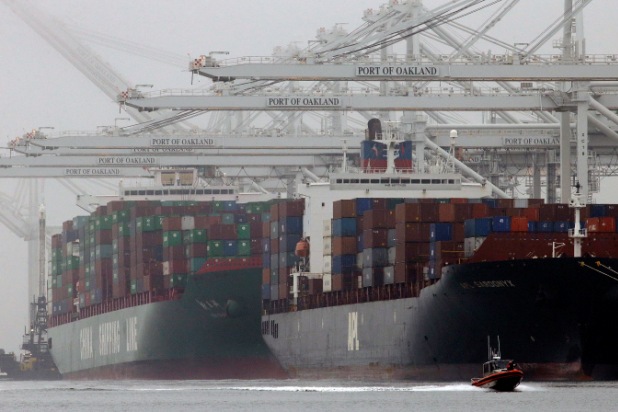 In this Wednesday, Oct. 23, 2013, file photo, container ships wait to be off-loaded at the Port of Oakland in Oakland, Calif. The contract that keeps workers on the job at 29 West Coast ports expires on Tuesday, July 1, 2014. Both sides have said not to expect a deal, and that they will continue to bargain. (AP Photo/Ben Margot, File)

LOS ANGELES (AP) — The contract that keeps thousands of dockworkers on the job at West Coast ports from San Diego to Seattle is expiring, but don't expect a disruption in the billions of dollars of trade that crosses the waterfront — at least not yet.

Both the International Longshore and Warehouse Union and the association that represents shipping lines and terminal operators at 29 ports have promised to keep negotiating past 5 p.m. PDT Tuesday, when the current six-year contract ends.

Indeed, no resolution is expected for weeks, with tough issues including whether workers should shoulder more of the hefty cost of health care yet to be resolved.

As talks drag out, jitters will grow among the companies that last year imported or exported nearly $900 billion worth of cargo across the West Coast waterfront.

The Pacific Maritime Association has said that labor peace is essential to keeping West Coast ports competitive, especially with larger vessels able to sail from Asia directly to East Coast markets once an expansion of the Panama Canal is completed.

In 2002, as negotiations reached an impasse, employers locked dockworkers out for 10 days, costing the U.S. economy an estimated $1 billion each day. The economic damage from a work stoppage now would be about $2 billion per day, according to a recent analysis by groups representing retailers and manufacturers.

"If operations are shuttered for an extended period, the detrimental economic impact would be significant and widespread," wrote the authors of the report, which was issued last week and commissioned by the National Association of Manufacturers and the National Retail Federation.

Aside from health care, other issues on the bargaining table include what jobs will remain under union control, the introduction of technology that could eliminate the need for some jobs, and workplace safety.

Both sides are abiding by a media blackout and not publicly discussing negotiations, which began in mid-May in San Francisco, where both the union and maritime association are based.