Celilo Arc Will Honor Tribes, Salmon and a Lost Way of Life 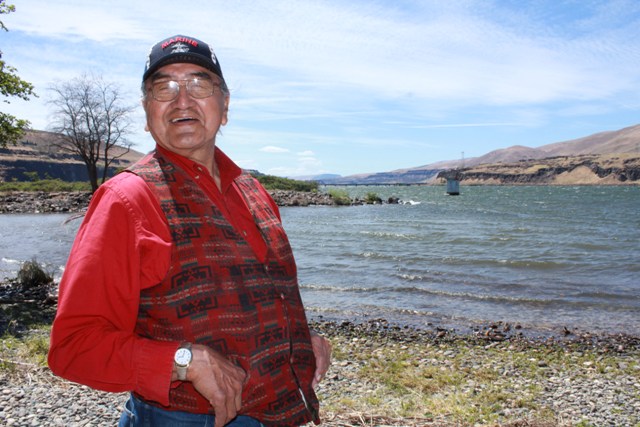 Antone Minthorn at the edge of what once was a thriving village and one of the biggest waterfalls in the world. Helen Silvis photo

Antone Minthorn stands at the water's edge in Celilo Park looking out across the broad expanse of the Columbia River.  On the opposite bank you can see the village of Wishram, sheltering beneath sheer basalt buttes and the vast expanse of sunburned hills that stretch north into Yakama territory.

The view is stunning. But what's most remarkable about this place is not what you see, but what you can't see. Hidden beneath these windswept waters lies an older landscape, with a massive waterfall, an ancient settlement and a trading center that for thousands of years was one of the most famous places on the continent.

"The Celilo Falls fishery was an important gathering place for the tribes," says Minthorn, an elder from the Confederated Tribes of the Umatilla Indian Reservation. "All the salmon would come through here from the ocean and continue all the way through the interior up to Canada. This was the center of the tribal economy."

Salmon were at the heart of that Northwest tribal economy for more than 11,000 years. Between 15 - 20 million of them would pass through the falls every years, some weighing more than 50 lbs. Treaties signed in 1855 with the Yakama Nation, the Confederated Tribes of Warm Springs, and the Walla Walla, Cayuse and Umatilla people guaranteed tribal fishing rights. 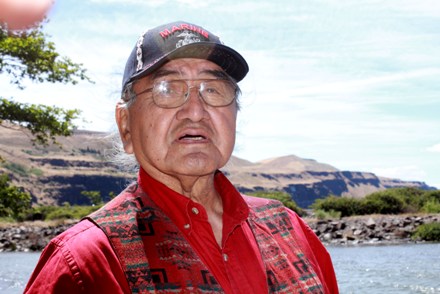 At Celilo, fishermen worked from wooden platforms built over 12 miles of falls and rapids. It was one of the largest waterfalls on the continent, carrying a larger volume of water at its peak than Niagara Falls.

And thousands of people would come together at Celilo every year to trade and socialize.

All that came to an end on March 10, 1957, when the US Army Corps of Engineers completed the Dalles Dam, blocking the course of the river, inundating the falls and drowning the settlement of Celilo. Congressional hearings had concluded that the dam was needed to generate electricity and wouldn't violate tribal treaty rights.

In practice, the dam ruined the salmon runs while destroying tribal economies.

It was the end of a whole way of life, Minthorn says. "It decimated the salmon until action was taken by the government to restore the runs."

To make sure the history is never forgotten and to honor the legacy of the tribes, the Confluence Project has chosen Celilo to host a large public art installation.  Artist Maya Lin has designed "Celilo Arc,"   a curved walkway that will overlook the Columbia at the site of the falls, where the fishing platforms used to be.

Started in 2002, the Confluence Project brings together the history, ecology and culture of the Columbia River through art installations that tell visitors the story of the land and its people.

"Even today the Native people's perspective is often left out of our family story," said Colin Fogarty director of the Confluence Project. "People don't know about Celilo Falls.

Minthorn, chair of the Confluence Project's board of directors, has helped guide its vision from the start.

"I was thinking about justice", Minthorn says. "Can art be part of justice? Yes it can.

"We need to recognize this area, not just for the general public, but also for our own people.  Indian children don't know about this history and they need to."

Lin collaborated with Pacific Northwest tribes, civic groups and other artists to create the  438-mile-long art project, along the route of the Lewis and Clark expedition from Clarkston, Washington, to Cape Disappointment, where the Columbia River meets the Pacific Ocean.

Other artworks include the Vancouver Land Bridge, which links Fort Vancouver to the banks of the Columbia, and seven story circles at Sacajawea Park, where the Snake River meets the Columbia. Understanding the past may make us better stewards of the environment for the future.

Knowing what your ancestors contributed to the story of our world is crucial because it tells you who you are. Yet it comes with a cost. When he learned about all those broken treaties, land thefts and destroyed lives, Minthorn became overwhelmed with grief and anger.

"I was very angry. It takes you a long time to get over that as a young man," he says.

Nevertheless, Minthorn went on to serve six years in the US Marine Corps. In 1973 he earned a bachelor's degree in planning from Gonzaga University efore going on to earn a master's degree in urban and regional planning from the University of Oregon. Minthorn lived in the Bay area with his family for a decade during the 1960s where he was active in the civil rights movement. He returned to the Umatilla Indian Reservation in 1970, at a low point for the tribes. But things were about to change, he says.

"Big changes were underway in Indian Country because tribal sovereignty was being restored after so many years of federal oppression," he says. "It was at that time the salmon runs in the Columbia River were being decimated by the dams and the salmon wars were on."

Minthorn accepted a job as a zoning and planning administrator in the Confederated Tribes of the Umatilla Indian Reservation tribal development office. And before long, he was elected to leadership roles, serving as general chairman for CTUIR and later as chairman of the tribes' board of trustees. He helped the tribes push for salmon restoration, while struggling to create a sustainable economy for Native peoples.

The introduction of tribal casinos and gaming has helped, he says.

"We are always looking for ways to sustain our tribal economy, because it's always changing." 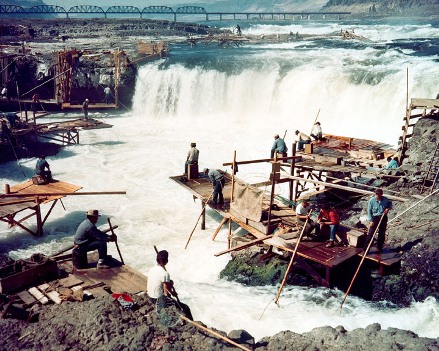 PHOTO: Native fishermen at Celilo Falls during the 1950s

Sustainability has always been part of tribal ways of living.

"The Celilo Falls Fishery was managed by the native fishermen when the salmon were running, and they would stop at certain times to let fish pass upriver to spawning grounds," Minthorn says.

"When the salmon runs were decimated in the Columbia and Snake Rivers, in the 1970s, the Umatilla Tribes closed the fisheries. Today, they are still rebuilding those salmon runs but from time to time salmon fishing is allowed."

One day, when Minthorn took his young son and another boy fishing on the Lostine,  a tributary of the Snake River. After catching several large salmon, he realized one of the fish was leaking eggs. They stopped immediately, and he told the boys.

" We should not be doing that. The salmon are spawning so this is the wrong time to fish."

At Celilo, Confluence will invest $8.2 million to install "Celilo Arc," and to restore and redesign the land, improve facilities at the site, and promote access to tribal treaty fishing. The project is scheduled for completion in 2016.

As for the salmon, Minthorn hopes restoration efforts will restore their populations. Fish ladders and spillways at dams have helped more fish survive their arduous journey, and improving the habitat of streams and estuaries also helps. And some small dams have been removed.

Maybe someday, we'll be ready to let the larger hydroelectric dams go too.

"The falls may one day come back," Minthorn says. "Breaching the dams is not off the table."