Retail Pot: Worry About Teens – and the Prison Population 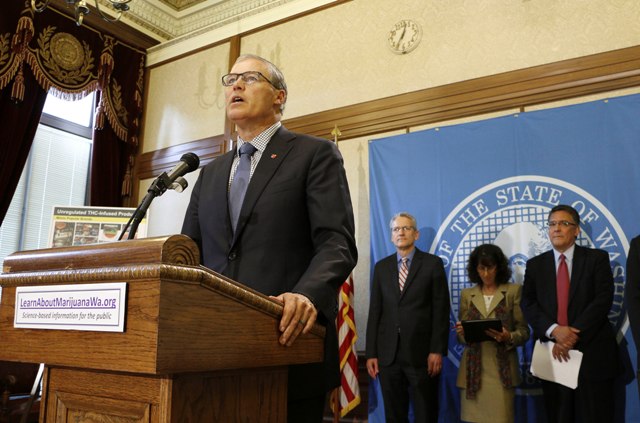 Gov. Jay Inslee, foreground, speaks to the media about public awareness and safety efforts the state is making in advance of the start of retail sales of recreational marijuana, on Tuesday, June 24, 2014 in Olympia, Wash. Inslee says that it's imperative that marijuana stays out of the hands of minors. (AP Photo/Rachel La Corte)

State leaders this week made an effort to address the growing paranoia about teen pot use in the wake of retail legalization that goes into effect after the first sales licenses are handed out July 7.

The issue is key because teen drug use remains one of the most potent arrows in the federal government’s war on legalized cannabis, and officials worry that voter approval of Initiative 502 two years ago potentially opened up young peoples’ access to it.

State elected leaders remain stumped by what seems at times to be their unwilling opposition to President Barack Obama’s anti-pot stand – despite his campaign promises to the contrary.

According to Obama’s official position on the issue, posted on WhiteHouse.gov, “The Administration steadfastly opposes legalization of marijuana and other drugs because legalization would increase the availability and use of illicit drugs, and pose significant health and safety risks to all Americans, particularly young people.”

The state Liquor Control Board has already banned packaging with cartoons or depictions of children, and mandates that product labels list amounts of active THC, and ingredient lists.

“The initiative legalized marijuana only for adults 21 and over and it is incumbent on everyone — retailers, parents, health professionals and public officials — to do everything possible to keep pot away from kids,” Inslee said. “If we fail in that, Washington’s regulated, retail market for marijuana may fail, too.”

“The federal government sent a strong message to Washington and Colorado that we must enforce against underage access to marijuana,” says Attorney General Bob Ferguson.

A $400,000 education campaign by the state Department of Health targets parents’ responsibility to educate kids about the health effects of pot, view it at www.learnaboutmarijuanawa.org/.

“Teens who use marijuana regularly are at higher risk for addiction and are more likely to get lower grades in school,” says State Health Officer Kathy Lofy, M.D.

Meanwhile Inslee on Tuesday announced a “comprehensive review of the criminal justice system” to find ways to slow the prison system’s growth and improve public safety.

“We’re forecasted to need another 1,000 prison beds by 2018, and I think this is the right time to take a step back, take a deep look at our current system and talk about opportunities to effectively leverage our public safety dollars,” Inslee said in rolling out the effort.

“I’m hopeful the work of this task force will reveal the drivers of prison growth so we can develop strategies to address them while continuing to improve public safety consistent with our Results Washington goal measure of reducing recidivism.”

Inslee’s office says the state’s prisons are currently 2 percent over capacity, and are expecting a 7 percent jump in the next decade.

Number crunchers estimate that rate of growth will cost somewhere between $387 million and $481 million in construction and operating expenses.

Inslee’s 21-member task force includes lawmakers and representatives from across the law enforcement community as well as a former offender and one community member.

It will be led by Sen. Jim Hargrove, D-Hoquiam and the governor’s general counsel, Nick Brown.