Monica Foster of The Skanner
Published: 30 May 2007 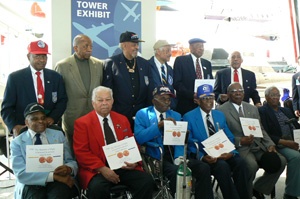 This past Memorial Day weekend honored not only those who have sacrificed their lives for their country, it saluted the past as well. Members of the Tuskegee Airmen were at the Museum of Flight over the weekend educated visitors on their significant role in the military.
About 500 people attend Monday's Memorial Day ceremony honoring the Tuskegee Airman, the first African American military pilots and the 332nd Fighter Group of the U.S. Army Air Corps. These are the only military pilots of World War II that hold the distinguished record of never losing a single bomber to enemy fighters.
The five pilots in attendance all became prisoners of war in Germany after being shot down during various European missions.
Lt. Col. Alexander Jefferson, 85, a retired school principal from Detroit, Mich.; Capt. Luther H. Smith, Jr., 86, a retired aerospace engineer from Villanova, Pa.; Lt. Col. Walter McCreary, 89, a retired state comptroller from Burke, Va.; Capt. Richard Macon, 86, a retired school administrator also from Detroit and local Tuskegee Airman First Lt. Col. William (Bill) Holloman III, 83, of Kent.
The military was segregated during World War II and military leaders thought African Americans were unfit and unable to fight for their country. Black Americans were assigned to service units, and the Army Air Corps made sure no Black man could ever learn to fly or service combat aircraft.
"They said that we couldn't fly, that it wouldn't work, but we knew we would prove them wrong," Holloman said. "We love this country even though we were treated as second-class citizens, and were willing to lay down our lives for it."
The unit of an estimated 15,000 pilots was formed in 1941 as result of pressures from the press, the NAACP and the White House. The war department built a "separate but equal" Air Corps Base near Tuskegee Institute in Alabama, where pilot training for Blacks was conducted. Four Fighter Squadrons and four Medium Bombardment Squadrons, plus their support units, were established.
The unit, based in Italy, flew P-51 fighter planes with red-painted tails and escorted bombing raids in Europe. By the end of the war, they were credited with shooting down more than 100 German warplanes, destroying numerous enemy vehicles and, most importantly, destroying the notion that Black men were unable to fly combat military aircraft.
Lt. Col. Jefferson flew 18 combat missions before he was shot down by ground fire in August of 1944 on the coast of Southern France. He was held captive by the Germans for nine months before he managed to escape and is the author of the book "Red Tail Captured, Red Tail Free: Memoirs of a Tuskegee Airman and POW."
"We're honored to be here today to remember those who made the ultimate sacrifice for their country," Jefferson said. "Even though we didn't have it easy, we were all part of the same team. We had no idea at the time how vital a role we would help play in helping desegregate the military, we just wanted to fight for our country like everyone else."
Capt. Smith was shot down on his 50th and final mission and Lt. Col. McCreary flew 89 missions and was awarded the Air medal and the POW medal.
This year, the airmen were awarded the Congressional Gold Medal from Congress and President George Bush for their service during the war.
The local Memorial Day ceremony included remarks by the museum's president and CEO, Dr. Bonnie J. Dunbar, and Tukwila Mayor Steven Mullet, an honor guard by the Washington Wing Civil Air Patrol and musical performances by the Boeing Employees concert band. The local Sam Bruce Chapter of the Tuskegee Airmen hosted a special lunch honoring the Airmen.
Weekend activities included panel discussions, autographs and book signings, fly-ins by the WWII Boeing B-17 G bomber, the "Aluminum Overcast," the Cascade Warbirds vintage military aircraft and hands-on themed family workshops. 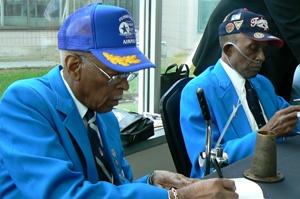