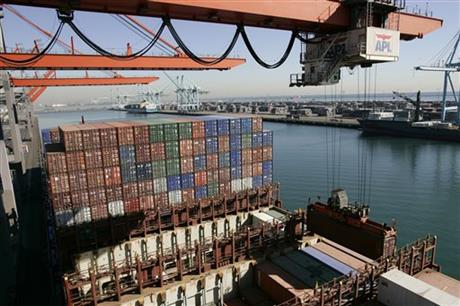 In this Dec. 4, 2006 file photo, shows are unloaded from the APL Singapore vessel at the port of Los Angeles. The West Coast ports that are America’s gateway for hundreds of billions of dollars of trade with Asia and beyond are no stranger to labor unrest and even violence. Now, the contract that covers nearly 20,000 dockworkers is set to expire, and businesses that trade in everything from apples to iPhones are worried about disruptions _ as the summer cargo crush begins. (AP Photo/Damian Dovarganes,file)

LOS ANGELES (AP) — The West Coast ports that are America's gateway for hundreds of billions of dollars of trade with Asia and beyond are no stranger to labor unrest and even violence.

Now, the contract that covers nearly 20,000 dockworkers is set to expire, and businesses that trade in everything from apples to iPhones are worried about disruptions just as the crush of cargo for the back-to-school and holiday seasons begins.

With contentious issues including benefits and job security on the table, smooth sailing is no guarantee.

On one side is the International Longshore and Warehouse Union, with its tradition of fierce activism dating to the Great Depression, when two of its members were killed during a strike. On the other is the Pacific Maritime Association, which represents shipping lines and operators of terminals at 29 West Coast ports.

Both acknowledge that they are unlikely to agree on a new contract before the current one expires June 30, but they plan to negotiate past that deadline. That would fit the pattern from contract talks in 2008 and 2002. In 2002, negotiators didn't reach an agreement until around Thanksgiving, following an impasse that led to a 10-day lockout and a big disruption in trade.

The union's total control over the labor pool means huge bargaining leverage, which negotiators have parlayed into white-collar wages and perks for blue-collar work. A full-time longshoreman earns about $130,000 a year, while foremen earn about $210,000, according to employer data. Workers pay nearly nothing for health coverage that includes no premiums and $1 prescriptions.

Neither side has publicly discussed progress on negotiations that began May 12 in San Francisco, which is headquarters to the union and the maritime association.

Twelve years ago, the shutdown had a lasting impact on how products moved in and out of the United States. Hulking cranes idled. Ships anchored in San Francisco Bay and outside ports from Los Angeles to Seattle. Economists estimated the impact at $1 billion each day.

Even after trade resumed, retailers — with their just-in-time supply chain — worried that West Coast ports risked becoming a bottleneck. Companies looked to Gulf Coast and East Coast ports, which courted them by upgrading facilities.

"They can't afford to have their goods hung up either out on the sea or on the docks," said Jonathan Gold, vice president of supply chain and customs policy at the National Retail Federation.

Between 2002 and last year, the portion of shipping containers that came into the U.S. through West Coast ports dropped from 50 percent to 44 percent, according to a study by Martin Associates, a firm that analyzes transportation systems. Imports to the Gulf of Mexico and the Northeast increased.

Even so, West Coast ports handled cargo worth $892 billion in 2013 alone, according to trade data compiled by the U.S. Census Bureau.

Worries over the current negotiations have prompted some stores to route shipments away from the West Coast, Gold said. Other importers planning for fall and winter shopping have shipped early to beat the contract's expiration date.

The maritime association warns that labor peace is essential to keeping West Coast ports competitive, especially with an expansion of the Panama Canal that will allow larger vessels to reach East Coast markets directly.

The union is not persuaded, at least not publicly.

"The competitiveness argument is an old saw that gets trotted out every time there's a negotiation," said union spokesman Craig Merrilees. "The claim has generally been used in an effort to extract concessions from the union members."

One area where the Pacific Maritime Association is looking for concessions is benefits. According to the PMA, the cost of benefits more than doubled over the past decade, reaching $93,200 per registered worker in fiscal year 2013.

During these negotiations, a new incentive is in play: In 2018, a 40 percent tax on the value of "Cadillac" health plans above a certain threshold kicks in under the Affordable Care Act — and the union's coverage qualifies.

Last July, workers and retirees picketed in Long Beach and in Tacoma, Washington, complaining that some families were shouldering tens of thousands of medical bills the health plan was not paying.

Employers said legitimate claims were being paid, but they were scrutinizing tens of millions of dollars of treatments that were likely fraudulent, including phantom appointments and charges for cosmetic surgery.

Other bargaining issues include what jobs will remain under union control, the introduction of technology that could make some jobs obsolete, and on-the-job safety measures.