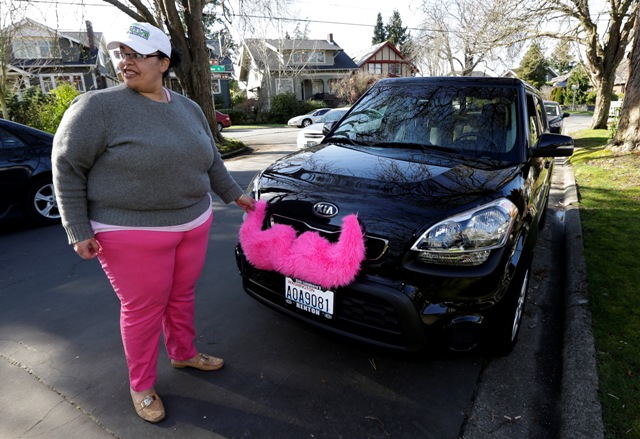 Dara Jenkins, a driver for the ridesharing service Lyft, adjusts the furry mustache drivers display on their cars when they are working, as she starts a shift in Seattle.

Seattle Mayor Ed Murray this week impressed political observers around the region by brokering a resolution to longstanding conflicts in the “for hire” transportation industry.

Pulling the plug on a new city ordinance limiting the number of rideshare drivers on the road at any one time, the move in many ways brings taxi and rideshare companies onto the same page, essentially restructuring both.

Murray says he will work with the Council to repeal the suspended ordinance and that new legislation will be rolled out “in the coming weeks.”

Murray has been meeting since mid-April to strike a deal between taxi owners, dispatch companies, taxi drivers, for-hire owners and drivers, as well as transportation network companies to find common ground in an industry that critics say has been slow to innovate locally.

“The taxi industry is pleased that we can now compete and will soon offer mobile app technology,” said Amin Shifow, who operates a wheelchair-accessible cab. “We will soon be the only service that the public can get with smart phone, phone, taxi stand and traditional hail without discrimination.”

Murray hailed what he called “Key terms of the deal:”

“The agreement honors the taxi industry’s historic role in Seattle as a key component of the city’s transportation infrastructure and as a vital source of jobs, particularly for Seattle’s immigrant communities,” Murray said in a statement. “It also embraces this rapidly transforming industry and recognizes that Seattle must stand at the forefront of innovation and not impede new ideas or add the burden of unnecessary regulations.”

“The For Hire drivers and owners thank Mayor Murray for bringing all parts of our industry together in order to reform city regulations to create a fair and competitive market for our services,” said Abdul Yusuf, Owner CNG For Hire and member of the For Hire Drivers and Owners Association.

"Uber is committed to providing the safest and most convenient rides in Seattle while also offering consumer choice for riders and economic opportunity for drivers.  Today’s announcement recognizes that the innovation economy is critical to Seattle’s future and we thank Mayor Murray for his leadership in reaching a compromise that benefits both riders and drivers," said Uber Seattle General Manager Brooke Steger.

"Seattle is a city that supports innovation and understands the transformative potential of technology. This is a city that is embracing ridesharing, and that’s why Lyft intends to be here for the long haul helping to facilitate a new era of transportation choices for Seattle residents. This agreement is a step in the right direction, and we look forward to working with the City Council to get it enacted into law," said Katie Kincaid, an executive with Lyft.

“Earlier this year I called for an agreement that would remove burdensome caps on transportation network companies and also continue the Council’s goal of reasonably regulating the industry to ensure that passengers and drivers are safe on our City streets,” said Seattle City Council Transportation Committee Chair Tom Rasmussen. “I applaud the Mayor for bringing all of the interested parties together to reach a compromise agreement which addresses this important issue, and for his work to ensure that innovative companies in this industry will be able to continue to thrive in Seattle.”

“I praise the inclusive process that ultimately led to this agreement.  I fully support the growing industry of alternative transportation, while assuring the public is safe, well served, and fares are fair. This agreement takes a giant step in that direction,” said Councilmember Sally Bagshaw.