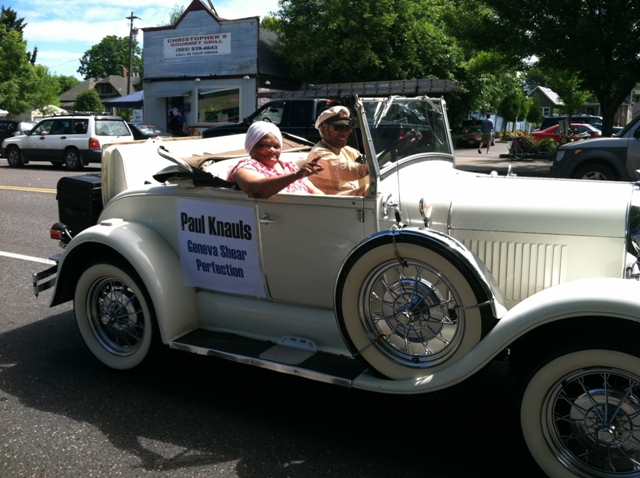 Clara Peoples, Portland's 'Mother of Juneteenth,' in the Juneteenth Parade with 'The Mayor of Northeast Portland,' Paul Knauls

Organizers of Portland’s 2014 Juneteenth event, coming up June 21 at Legacy Emanuel Field, say it's going to be different from past years – and the best ever.

Juneteenth Oregon received a community grant from the Northeast Coalition of Neighborhoods, which has brought about a new educational focus for the annual festival -- which still features great food, booths and tons of fun times in the sunshine.

The Clara People's Freedom Trail Parade kicks off, as usual, at 11 a.m. on Martin Luther King Jr. Boulevard, at N. Jarrett St., and will feature the Obo Addy Legacy Project as well as historical figures portrayed by local actors who are marching in the parade, then appearing at the fair at Legacy Emanuel Field is at North Williams Ave. and Graham St.

Ransom’s appearance as George Fletcher — the Black cowboy who won the Pendleton Round Up but was denied the prize because of his race — is particularly poignant, because Ransom’s father Frank, was Fletcher's personal friend back in the 1950s and 60s in that rural Eastern Oregon town.

Organizers say the historical figures are intended to engage the children, and encourage them to read more, especially about their history both local and national.

With that in mind, the Oregon black pioneers will also have a display on their work researching Oregon’s earliest African-American residents.

This year, the Juneteenth festival features an extended kids' space, with arts and crafts including doll making, face painting, and many physical activities including three-legged race and balloon toss.

The event is free of charge, for more information call 503 – 235 – 8079. E-mail Juneteenth [email protected], or go to Facebook, Juneteenth Oregon.