Stars of Track and Field

Brian Stimson and Kelley Moyer of The Skanner
Published: 30 May 2007 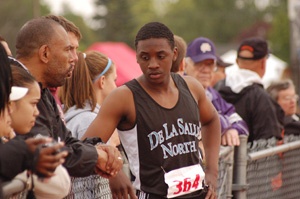 When you're competing at state, it doesn't matter that you've dominated your team all season long. It doesn't even matter that you're a contender for first place in your event.
Here's what matters: one-half inch and a twisted ankle.
One half inch is all Dominique Harris needed to win the triple jump event at the state track and field meet on May 19.
Instead, Harris took second in the event and twisted his ankle in the process – putting him out of the running for gold in the long jump, an event Harris has dominated all year.
He says the Triple Jump loss was made even more aggravating by the fact he knew how far he needed to jump to win.
"I had the last jump to beat the guy who beat me," he said.
In a perfect world, Harris would have won the triple jump and the long jump. He would have gone to college in Tennessee next year knowing that he, a kid who just spent four years at De La Salle High School – a private school with a very up-and-coming track program – just beat out the best jumpers Oregon has to offer.
Instead, Harris took eighth-place in the long jump. Meanwhile, De La Salle's girls team came in fourth at the state event and stand-out senior Daedra Carline took home a first-place finish in the 4 X 100 relay and second in the triple jump.
With Harris and Carline on the team, De La Salle's track and field program got an enormous boost this season.
"Our track program is now competitive enough that a kid could come because they liked the school and the track program," says Dennis Carline, the team's jumping coach and father of Daedra Carline. "De La Salle is establishing some traditions (by doing well in) certain events."
Carline says the whole team should be commended for an impressive year, but Harris and Daedra have helped make that year possible.
The two are the top point-getters for the team. Harris collected 211.25 points and Daedra 270.5 points this season – putting them way ahead of any other track and field competitor at De La Salle. They've both scored one perfect match this spring, and, at the district meet Harris blew away the competition in his events and Daedra broke district and school records in the triple jump.
Harris admits that he and Daedra have helped carry the De La Salle team and says the two teammates set goals for each other to meet and break.
Harris' mother, Angie Harris, jokes that there's a rivalry between the two teens, but Dominique denies that.
Coach Carline says the two young track stars pushed themselves to be the best they could possibly be this season.
The coach remembers coming to the track field late one evening and finding Harris there, practicing by himself.
Harris says he thought three days a week of team practices weren't enough.
"I knew there were things I needed to work on," Harris says. "My steps were off for the triple jump, and my feet went straight (coming off the blocks for the 100 meter sprint)."
When a difficult practice threatened his edge, Harris just worked harder. He poured over the home movies his parents made during meets and analyzed his form and figure. He noticed that his jumps curved slightly to the right or left and that his feet went off the blocks in the 100-meter race, then he tried to correct those inaccuracies.
"That's how Dominique and Daedra turned the corner," Coach Carline says. "They focus on the things that make them successful."
The coach noticed a change in Daedra's behavior this year too.
"This year she wanted to do it," Carline says of his daughter. "I didn't have to push her. She really broke through this year."
Although Carline might be losing two of his star players next year, he's confident that De La Salle's up-and-coming athletes will continue to improve the school's athletic reputation.
"We went on a real recruiting drive this year," Carline says. "We had a lot of kids running track for the first time, and they looked hooked."
As for Harris, he plans to try out for his college's team, but thinks he'll be too busy focusing on his classes in computer science to compete in many track meets. The sport has taught him a thing or two about life, though.
"Track forced me to do better in school," Harris says. "I've become more unselfish by putting my teammates before me. That matured me as an athlete." 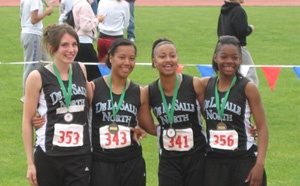